PROGRESS REPORT#21: WHEN THE MUSE SPEAKS 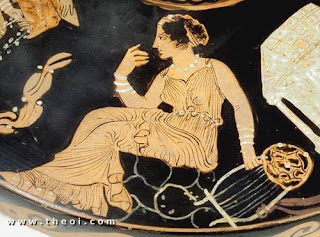 "Muse of the round sky, daughter of Zeus,
I sing my poems loud and clear to you."
Alkman


I spent most of yesterday trying to sort out some small errors I'd made in my novel, the sequence of some events that didn't seem right. I'd intended to do a lot of writing but mostly puttered away the day, managing only about an hour of work taken from the notes I'd made the night before.

The day was cold and wet, very bleak. I only went outdoors once and that was just to mail some Christmas cards overseas and pick up a few groceries. I played on the computer, watched some TV, cleaned out the drawers sorting my winter stuff and packing away my summer. The whole day went by and really, I didn't accomplish much as far as my novel writing was concerned.

It was very late when I tucked into bed and whereas I usually fall asleep quickly, this night I tossed and turned and could not get to sleep at all. Then, She spoke to me. The Muse. At first it was just a line or two which I knew I had to get up and write down. Then, when I was settling back into bed again, there was another line...a whole paragraph...and I realized that She was telling me what I'd been trying to figure out all day. So I got up and started writing. I wrote about four pages and then I went back to bed and fell right asleep.

Today I got up really in the writing mood. No more procrastinating. Thanks to the Muse, I had a good start on the day. I managed to solve some of the strategy problems I was having, things became a lot clearer to me, and the notes I'd made during the night had actually brought me right up to a crucial anti-climax of the novel. With a few added scenes in between I should be able to sail quickly through this next part and then I'll be on the homeward stretch, with the end very clearly in view.

It's exciting when that happens and it's been awhile since the Muse spoke so strongly to me. I recall when I used to live in the shepherd's cottage in Lala, Euboeia, that often She would speak to me in the night. I had no electricity there, so I'd have to get up and light the lamps and sit by candlelight to write the words, knowing that if I didn't, I'd have forgotten them by morning.

As far as the progress of Shadow of the Lion, I may not meet my goal of finishing by the last day of Autumn, but I'll be very nearly done by the end of December. I'm already visualizing the 'wrap' party I have planned at a Greek taverna in my neighborhood.
Yesterday I consulted Cecilia Holland in regards to whether or not I should find myself a mentor before I start doing the final draft which will entail a good deal of cutting. I feel I need someone who understands the history as well as the techniques of writing. She suggested that I might find someone at the university, but to make sure it's someone I trust or it might not work out. So I'm still thinking about this. Perhaps I will get just as thorough a reader's critic from my Athens friend, Dinaz, who has requested I send her the MSS when it's done. What do you other writers think of this idea? Have any of you had a mentor to advise you on your final drafts?

My Muse comes after midnight
Nudges me awake,
Whispers urgently:
"Get up! Write!"
I curse her, stumble across the dark room,
Search for matches, light the candle wick.
Where has she been in the daylight?
How many hours did I want for her
Listening for her voice?
"Where were you?" I ask.
"Was it your voice I heard
While I daydreamed in the sun.
Or was it only the sound
Of sheep bells on the mountain,"
"Write!" she demands. "Write!"
If I wait til morning
The words she whispers to me
Will be extinguished
Like this candle flame
As I snuff it out.

I wish my Muse would wake up and give me a swift kick in teh rear. I can't stop procrastinating.
And I have a deadline looming like a tidal wave over my head. Ack!!

Tell you the truth, I'm an expert on procrastination (see a previous blog I once wrote on this subject).
But lately I have really made an effort to stay more focused and that night when I had the rush of words (thanks to the Muse) I really knew it was important to get up and write, even though it was 2 a.m. It has been so long since that happened to me so it was actually quite exciting!

I wish my Muse would visit more often!

Comments appreciated. Now she seems to be on vacation again! Yoohoo, Muse! I need you again!

On the mentor/reader issue, I'm not sure what's best -- guess that depends on the individual writer and what he/she needs at a given point along the way -- but I imagine you would benefit from comments from a variety of readers. Each reader, with or without expertise in the history, will see the story as a story, and those with historical expertise will also be able to evaluate that component of the story. But historical fiction is still storytelling, as for any other story, and any reader can be a help in getting a sense of what works, what's compelling, or not, etc.

I'd suggest not hesitating to send it out to any readers whom you trust to let them offer whatever insights they can, and let them know what type or level of detail you want for the feedback, etc.

I don't think waiting on a mentor, or on getting one, is good. If you manage to get one, go for it, but that shouldn't stop you from continuing on with what you would otherwise do.

I'm writing this with no experience to equate the decision you're facing and no idea whether I'm even addressing the real import of your question. Just thought I'd add my minuscule two cents for what they're worth, which ain't much, but I wanted to encourage you anyway to send your work out when you're ready and keep on with what you're doing! You've come so far already and are getting there!

A, thanks for this very valuable comment regarding mentors. I appreciate your advice. Yes, I feel that if there is a mentor for me one will appear because going to 'look' for one may not produce the perfect match for me. I have full trust in the reader's advice I know I will get from my Athens friend and from a couple of the classical scholars I am friends with from my Athens days. I have confidence in my own writing/research and feel I am presenting a well-written work of historical fiction that will at least spark reader's interest in the characters and the time.

Now I get to use one of my favorite words:

(Hope I spelled it right!)