SHADOW OF THE LION: BLOOD ON THE MOON IS LAUNCHED! 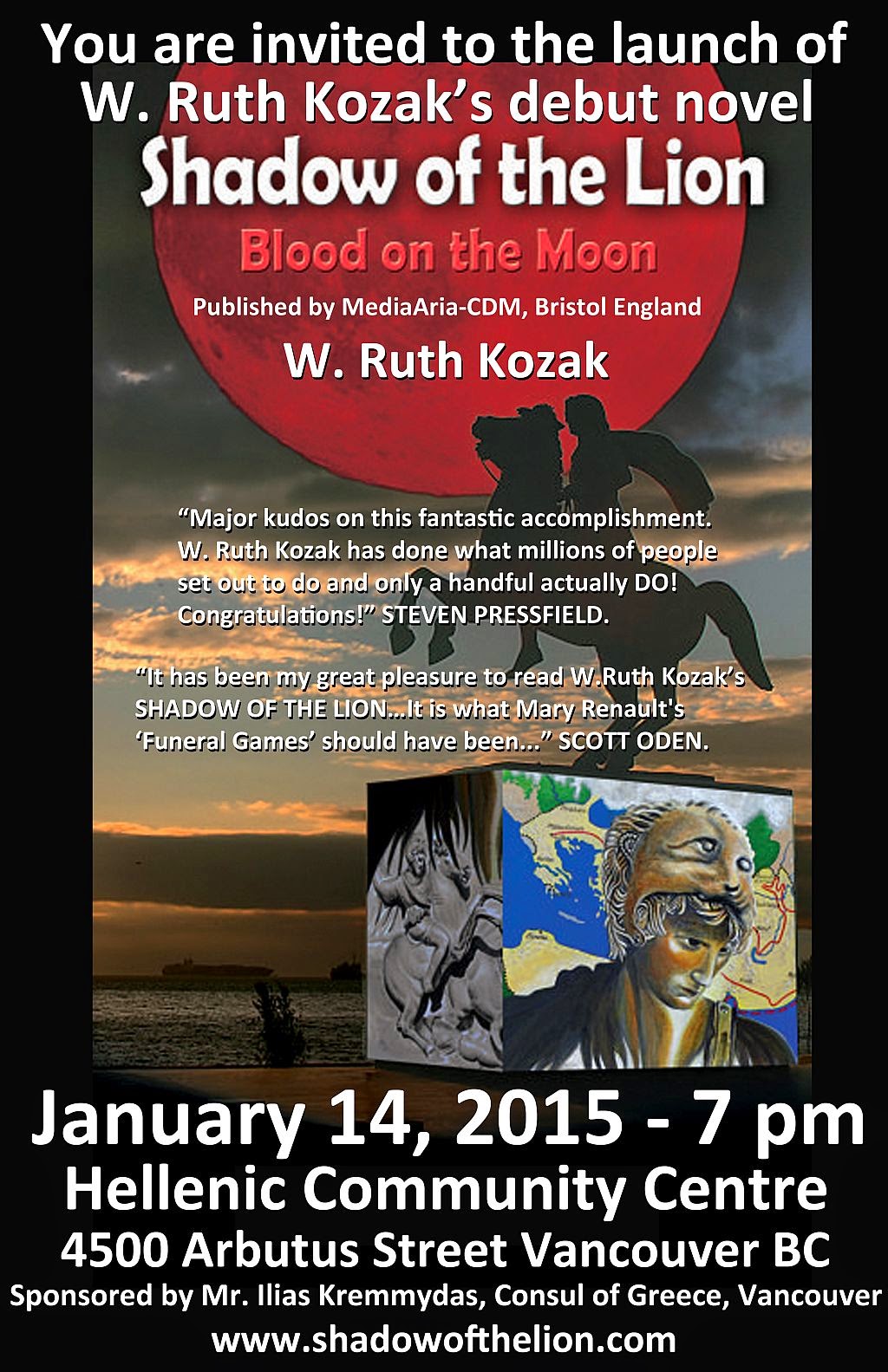 After a fifteen year journey SHADOW OF THE LION is finally launched into the world.  The first volume of two, SHADOW OF THE LION: BLOOD ON THE MOON was introduced at a very successful book launch sponsored by the Greek Consul at Vancouver's Hellenic Community Centre on January 14,2015.  I couldn't have even dreamed of the reception I got, with a packed house, standing-room-only crowd of fans and supporters.

Mr. Ilias Kremmydas, the Greek Consul spoke highly of the book. He calls it "Greek's answer to Game of Thrones, only it's a true story!"  I have to thank the Greek community, especially the Consulate, for all the support they have given me going back to 1993 when they sent me to Greece to do research. 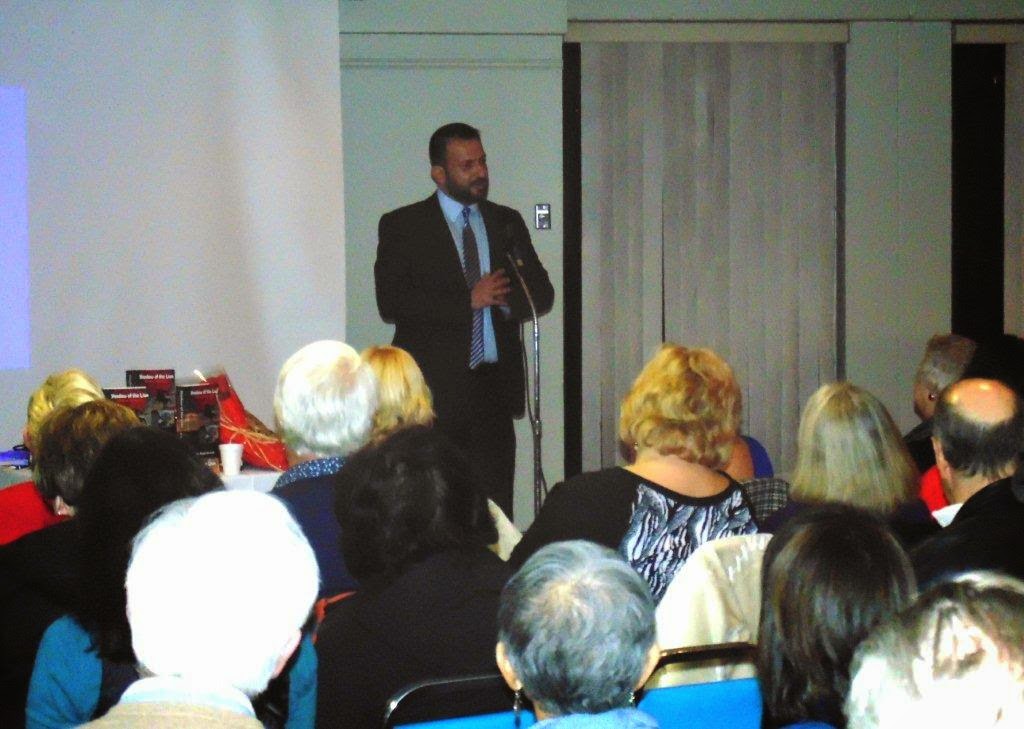 Here is the opening speech I made, thanking them and to my friends who have supported me and participated in this wonderful event:


THANKS TO MR KREMMYDAS FOR SPONSORING THIS EVENT & THANKS ELENI KERASIOTIS AND THE STAFF OF THE HELLENIC COMMUNITY CENTRE. A WELCOME TO EVERYONE WHO CAME TO THE LAUNCH.
MY APPRECIATION TO THE GREEKS WHO HAVE SUPPORTED ME IN THE WRITING OF ‘SHADOW OF THE LION’.
My relationship with the Consulate of Greece began in February 1991 after a letter I had written to the Vancouver Sun was published defending the Greek’s Macedonian history. The consulate sent me a book about Macedonia as a way of thanks. Following the letter, a story I wrote, “Macedonia, Greece: The Spirit of Alexander” was published in the Vancouver Province.  This story further piqued the interest of the Greek Consul, Helen Sourani-Potamianos, and she invited me for coffee. During this meeting she expressed thanks that a non-Greek person should support the Greek cause reading the Macedonian question. She was a Greek Macedonian herself and appreciated that I would support this through my writing. I explained that I had studied this history since I was a teen-ager and was just beginning to research and write my novel SHADOW OF THE LION. I had also lived in Greece from 1983 – 87 and had intended to return to Greece when the first Gulf War broke out.  Mrs Sourani-Potamionos suggested that the Consulate would help me return to Greece so I could do further research and she arranged this with the Director for Canada of the Greek National Tourism.
Once I arrived back in Athens, a Greek journalist friend got me an appointment with the Ministry of Culture and in turn, they arranged for me to go to Thessaloniki to meet with the Society of Macedonian Studies. I had an interview with Dr. Prof. Theresa Peutzopoulou who was the secretary at the time and she also arranged for me to meet with a professor from the Aristotle University regarding the history surrounding Alexander the Great. However, he was unavailable, but kindly sent me a bibliography list of book I could use for research.
For most of the ‘90’s I lived in Greece for six months at a time doing research with the help of various Classical scholars, the Finnish Institute who arranged for me to have a museum pass, the Norwegian Institute and the British School library and Gennadius Library where I did some research.


Through the years I’ve kept in touch with the Consulate here in Vancouver to inform them of the progress of the novel, finally its completion and acceptance by MediaAria-CDM publishers. When Mr. Kremmydas received my letter he immediately contacted me and suggested that we meet.  He has taken a genuine interest in my work, both the novel and travel writing about Greece and links have been posted on the Facebook page of Greece in Canada. I have even been invited, if possible, to do some readings back East while the current exhibit “From Agamemmnon to Alexander the Great” is on display.
I have always appreciated the help, encouragement and enthusiastic response for my writing that the Greek people have shown and the generosity of the Greek Consulate in helping me forward my dream, assisting with my research and promoting my novel.
When I was in Greece this past September I was invited to read from SHADOW at the Athens Centre and they provided a reception in the courtyard. I was also invited to Larissa to present my book at a conference for World Poetry, and when I returned to Vancouver, the World Poetry organization here awarded me with an ‘empowered writer’ award.  I also read to two classes of grade 9 students at the Athens Community College. The Greek people have warmly welcomed me to their country which I consider my ‘second home’ and for this I am grateful. Thank you, Greece. This book is for you!


THANKS TO MY SUPPORTERS:
To my 2 children, Alexandrea Evans and Steven Kozak to whom the book is dedicated and my late friend Roberto Hallberg who was such a great support while I was writing and researching in Athens.


To my Scribblers Writers Critique group some of whom, like my friend Susan Lundhal who spoke on my behalf tonight, were with me from the beginning of this 15 yr journey
To my Critique readers:  Ingrid Klassen and Renate Ford who meticulously plowed through the whole 1700 page of the original manuscript and helped me see where I could correct and cut.
To my editor, Joyce Gram, who is the best editor in the Lower Mainland and whose excellent skills were noted by my publisher, MediaAria-CDM of Bristol England to whom I am also so grateful. When the publisher first read the novel he fell in love with it, being a huge fan of Mary Renault. Because it was such a long novel he suggested we split it into two parts. Blood on the Moon is the first part of the story and the second half, The Fields of Hades will be published in 2016. You will also note in the book my acknowledgments to writers Steven Pressfield, Scott Oden and Dr. Jack Dempsey who were my mentors.
Thanks also to my friend, and talented artist PATRICK MCFARLANE who worked diligently on the artwork which unfortunately wasn’t used to its advantage other than the back cover, much to his and my disappointment.
Thanks to my brother-in-law JIM NIELSEN who kindly offered to be my publicist.  And my writer friends MARI KANE who agreed to handle the slide show for me, and DIANNE MAGUIRE for her introduction. And PETER PRONTZOS who generously offered to write a review on SHADOW for the Vancouver Sun and participate in this launch.
And thanks to all the writing community including our guest reader, award-winning poet MANOLIS ALIGIZAKIS. I had the privilege of attending a book launch for Manolis in Thessaloniki last September.
THANKS EVERYONE FOR COMING TO THIS EXCITING EVENT. 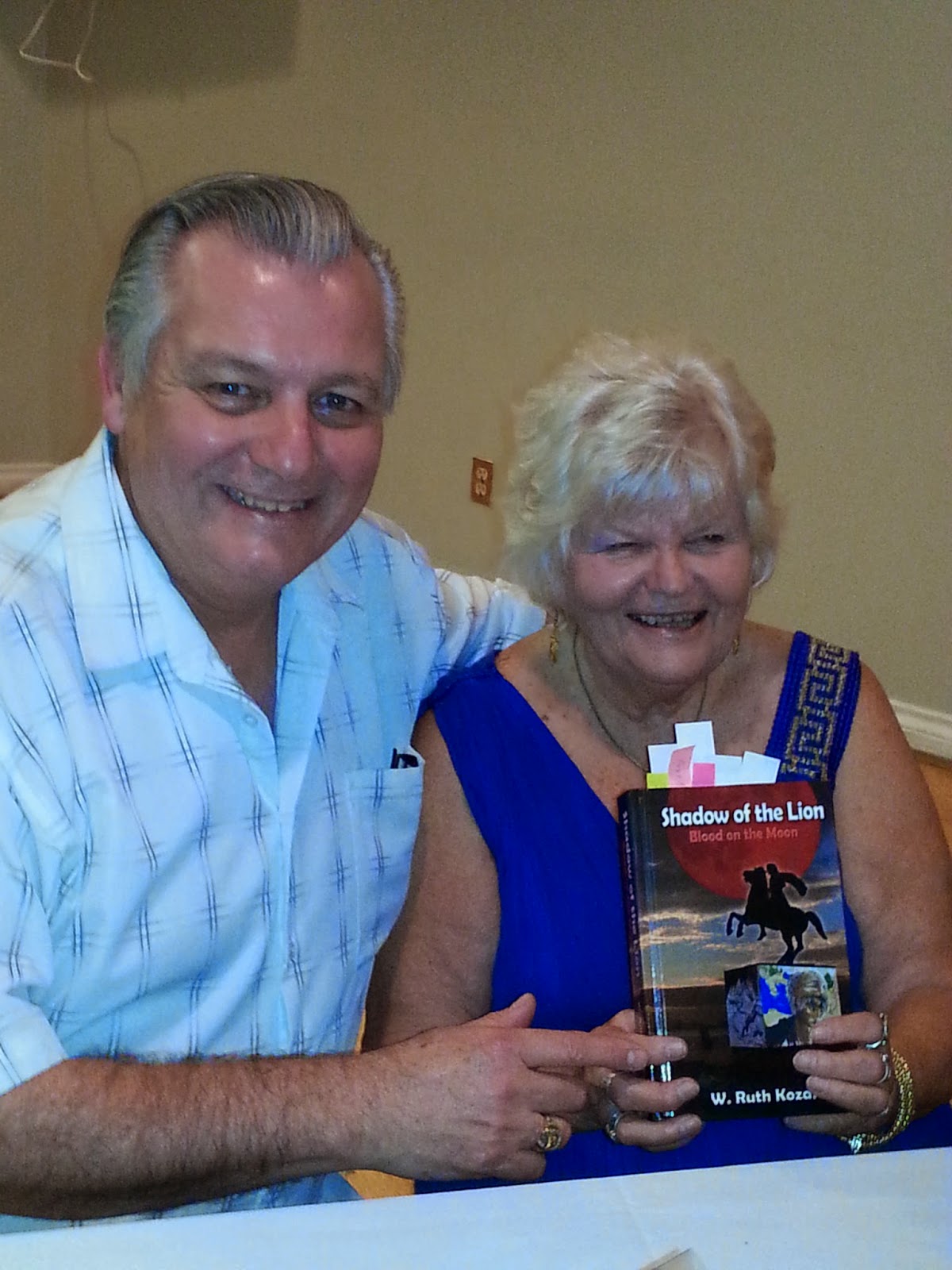 My son Steve Kozak and me
When I was in Greece last September, I purchased a Grecian style gown to wear for this important occasion. I also bought some gold Greek patterned earrings to go with the expensive Macedonian style gold necklace that I had bought previously. My hair stylist, Jackie Love, even did my hair for me (free!) that day.  So I really felt like a kind of 'celebrity' and especially with the grand reception I got and the lineup of people later wanting to buy a signed copy of my book. (I could have sold three times as many as I had on hand!) 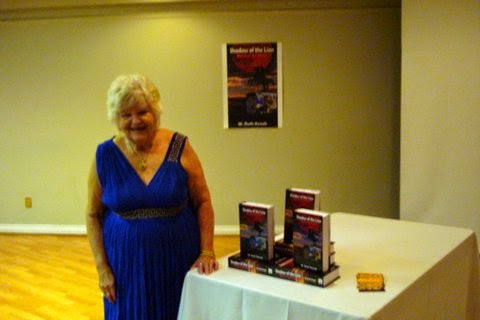 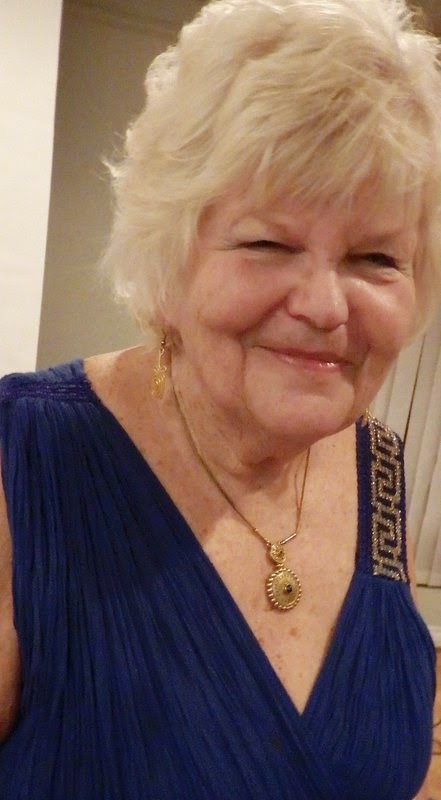 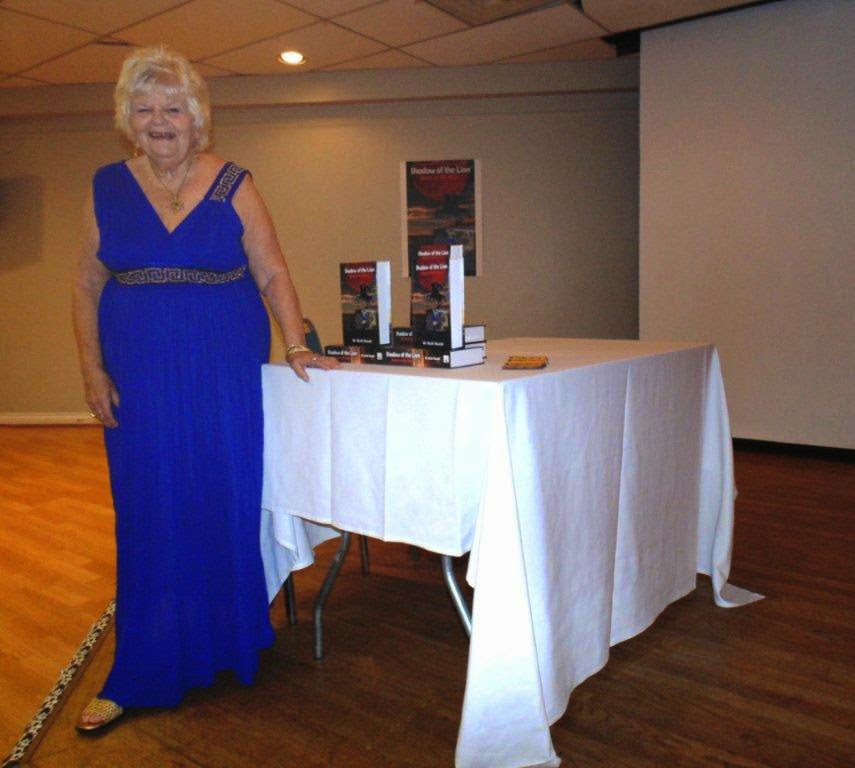 So now the launch is over, I am busy promoting the book, lining up book readings and other events. It required dedication to get it all done but it's worth every minute of my time!  I can't express how happy I am about the book finally getting published, and I look forward to volume two THE FIELDS OF HADES which will come out in 2016.  Then we get to do this all over again! 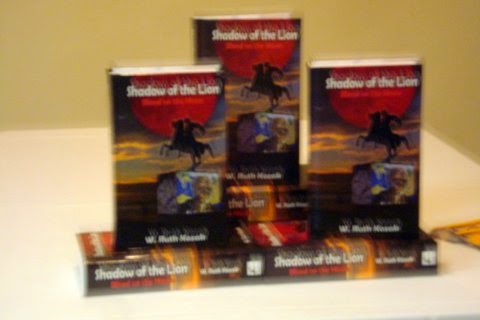