SHADOW OF THE LION: THE FIELDS OF HADES.

It's been a while since I blogged here and a lot has happened since my trip to Greece in Sept/October 2016.  The second half of SHADOW OF THE LION was published in January 2017 and is now available on Amazon.com and the Book Depository (which doesn't charge shipping!)

The second half of the novel is subtitled SHADOW OF THE LION: THE FIELDS OF HADES and it is an exciting end to the tale of the fall of Alexander the Great's dynasty with the battle lines drawn not only with the Successor who vie to take over the Empire but also the women who vie to take over the throne.  I'll post more details on this but for now, here's the book as it is. I love the cover and I know you'll love the content. 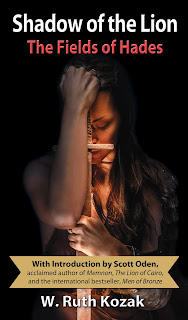 As the after-shocks of Alexander’s death bring disorder to his Empire from Macedon to Persia, a deadly power struggle is waged over who will dominate to rule.
Alexander’s Generals ‘The Successors’, contest who will emerge to rule the vast expanse of Alexander’s Empire. The ‘Royal Women’ Alexander’s mother Olympias and niece Adea-Eurydike also vie for control.
SHADOW OF THE LION: THE FIELDS OF HADES, is Book Two of an epic story of political intrigue and ruthless ambition, complete with all the ingredients of a Greek tragedy. It is also a story that happens to be true.