Well here I am again after several months absence!  I left my home the end of August for an extended trip to Europe, starting with London which included a walking tour of the Cotswolds. Then on to Caerphilly Wales to visit cousins. From Cardiff I flew to Alicante Spain and was met by my travel writer friend Inka who hosted me at her home in Torrevieja for several days. Then I traveled by bus to Malaga where I stayed with friends from Vancouver who run an English school there. On Sept. 10 I flew to Athens, Greece where I spent the rest of my vacation which was partly fun and partly writing related work. I went to Naxos for a week of rest and meditation, staying 3 days in a bed-tent at Maragas beach and 3 days in a lovely hotel near Agia Ana. Managed to draft 5 poems and the beginnings of a new chapter for my current w.i.p. Dragons in the Sky.

There were many highlights of this wonderful trip but mainly I want to refer to those related to my writing.  That is, the excellent reading I was invited to do at the Canadian Institute on Oct 7 in Athens.  This was quite a thrill for me. A week earlier I'd been introduced to a group of Greek academics at the Hellenic Institute for Strategies and was treated like a visiting celeb. Many of them attended my reading of SHADOW OF THE LION: BLOOD ON THE MOON at the Canadian Institute. 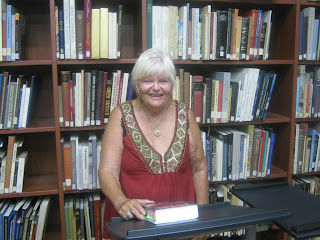 I have been so well received by the Greeks and by these organizations in Athens who invited me to read. The Canadian Institute has invited me to return next year when book two THE FIELDS OF HADES is published. And I also received another invitation from the Athens Centre where I read last year.

I had many adventures on this trip and most of them were related to finding new travel writing ideas. I'll be posting on my http://travelthroughhistory.blogspot.com  soon but here's one of the highlights from Greece related to historical writing. 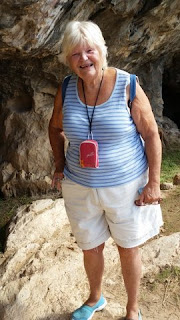 A visit to the Cave of Euripides

The Greek poet/dramatist Euripides was born on the island of Salamina and live for a while in cave up on the mountainside.  When I went to visit my friend on Salamina she told me about climbing to the cave but said it was a steep climb. This year I was determined to make an attempt to reach it. It turned out to be not as difficult as I'd anticipated as it was a switchback trail.  What a thrill it was to stand outside the cave where this renown writer had penned some of his famous dramas!  Apparently there were nine rooms in the cave. You aren't allowed to venture in now as it would be dangerous because of some erosion. But just to stand there and take in the magnificent view down the mountain toward the sea was an inspiring experience for me.

I'll post more writing news here soon. I'm scheduled to go on a radio program next week for World Poetry to talk about my adventures and the book.  SHADOW OF THE LION: BLOOD ON THE MOON has been well received and I'm anticipating the next volume to be ready by next year. Hope to start the final edits on it soon!  While I Athens I also visited some bookstores to inquire about translations and gathered a bit of info for my publisher. The Greeks are very anxious to see this novel translated so I hope this eventually will be possible.

Meanwhile, the book promo goes on. This week I'll volunteer at the Surrey International Writer's Conference which will give me a chance to schmooze and make some new literary contacts.
My writing classes have resumed and soon I hope to be offering some more workshops.

Posted by Wynn Bexton at 1:04 PM No comments: