ON THE QUEST FOR GREATNESS 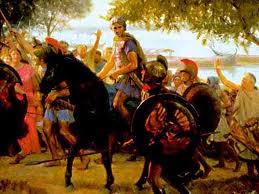 When Alexander the Great set off on his conquest to drive the Persians out of Asia Minor, I wonder if he realized his journey was going to last over ten years and take him to the farthest reaches of the known world.  (In fact, if his men hadn't mutinied when they reached the Hydaspes River in India, he would have kept going to the Encircling Ocean.  He already knew about the silk route that came from far beyond to the east.)

Just so, when I started writing my novel "Shadow of the Lion", I had no idea it was going to take me on such a long journey over such a lengthy period of time.  I started small -- writing a juvenile historical that should have only taken me about a year to write.  I'd already spent over a year researching it not counting my interest in Alexander that dated back to the age of 16.  Alexander crossed the Hellespont intending to drive the Persians back, but every battle was a victory so he kept on going.  I realized after a year of writing "Shadow" that it was too political a novel to be completed as a juvenile historical. So on the advice of a kid's book writer I started over, using a multiple point of view, given more attention to the theme "how blind ambition and greed brought down a world power."  And so it went...and the years passed and finally by the end of 2010 I had written"the end".  But that wasn't really "the end" any more than Alexander's story ended with his suspicious death in Babylon at the age 33.  Because the battles went on long afterwards.  (And that's what I was writing about.)

Now it's 2012 and I am finally seeing the light at the end of the tunnel,  or the completion of the 'conquest'.  After a whole year of having two reader's critiques done and going through the manuscript painstakingly at least three times (not counting the block editing I did while writing it, thanks to the adept critiques of my writing group), I am now editing again, thanks to the professional help I have had in taking a final serious look at what I've written : corrections, cutting, formatting.  And pretty soon now, I hope I'll be finished!

However, just as in any other conquest, there are other things to take care of.  (Alexander left behind some of his soldiers to populate the cities he had establishing along the way. He entrusted his empire to his Successors, who unfortunately managed to destroy it.)  I have to make sure everything is taken care of: synopsis. query letter, Author's notes, bibliography, glossary, a map, a list of characters.  And then, hopefully, the manuscript will be in fit shape to send out into the big world of publishing.

I'm aiming for this summer.  This means I must stay on track, work a bit every day on completion, make sure everything is corrected and presentable.  Then I hope I can turn it over to good hands who will see that it finds it's rightful place in the world of books.  With all the research and writing, rewriting and editing, this has become like a 'life work'.  But I don't regret a minute of it and I feel confident that it's going to be a success.

Posted by Wynn Bexton at 2:46 PM No comments: