Don't kid yourself. Writing is work. And it can be very difficult work that requires a lot of concentration and skill. Some people think it's 'glamorous' to be a writer, believing that somehow novels are produced by osmosis or some kind of magical abrecadabra system. It's not true. Writing IS work.

It took me a long time to reach the point where I could say "I'm a full time writer", but that doesn't mean I just laze around home all day, playing at the computer, going on adventures, spinning tales. No. I really have to work at it if I want to make my writing 'pay'. Unfortunately this isn't as easy as a non-writer might think. For one thing, it's a big deal just trying to stay focused on what I'm supposed to be doing. There are countless distractions and I'm an expert at procrastinating or finding something more interesting to occupy my time. How many times a day does one need to check their e-mail or visit Facebook? That's just the beginning of all the numerous ways there are to avoid doing the 'work'.

In spite of teaching classes at which I go over the 'rules' of being a successful writer, I don't necessarily pay attention to them myself. Rome didn't get built in a day. Neither did a best selling novel.

Writing can be very discouraging work as well. If you are working on a novel, it can seem endless. Don't kid yourself into believing that a novel can be whipped up in a few months. It sometimes takes years! And don't think just because you have a good idea for a story that you'll be able to spin that story out in just a draft or two. Writing, rewriting, editing...it's endless!

Just to remind myself of the pitfall of writing, I will write down some of the basic 'rules' here and perhaps in doing so it will stimulate me to start paying attention to the task(s) at hand, because I have to do this in order to make any new headway on the novel (which is still not completely finished) and to also make time for the travel writing that I must do. As the travel writing (for Planet Eye Traveler and freelance markets) is one of my sources of income, this is very important. I also teach writing classes, another source of income that allows me the privilege of being a 'full time writer', but this also takes a lot of preparation. So it is most important to be organized and discipline. Someone recently wrote a statement that 'writing is 5% talent and 95% perseverance' Well, in the first place you need way more than 5% talent to write successfully otherwise it's a waste of your time. But you definitely need a lot of perseverance, maybe even 100%! Writing is not easy and it can be downright discouraging. So be be successful you must persevere.

What does it take to be a writer? Basic ability is not enough. You must observe these 5 D's: DESIRE, the desire to write that novel more than anything else! DRIVE: the drive to get started. DETERMINATION: the will to continue whatever the stumbling blocks and difficulties encountered along the way (there will be lots!); DISCIPLINE; The discipline to writer every day, whatever your mood; DEDICATION - to the project until the very last page is finished. At all costs, avoid this 6th "D" DISTRACTIONS: the enemy of all writers. And then there is the very important "C": COMMITMENT. When you start a project such as a novel, you must be committed if you want to finish the work. Sure, sometimes you need to take a break, do some other kind of writing, or tend to personal affairs, but if you are serious about your work you will come back to it refreshed and with new ideas that will help you COMPLETE your project.
This novel will be with you for a long time, so you better have thought about it beforehand. When it's ready to be written, you'[ll know. It will be with you day and night. You'll even dream about it. So, if you prefer painting, cooking or watching TV, forget it! Now, get busy and start WORKING! 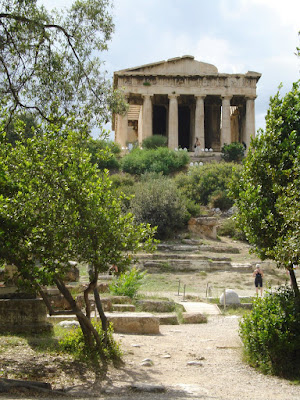 The first morning I arrived in Athens, Greece, in October 1979, I left the Tempi, my five-story walk-up hotel on Eolou Street and stepped out to the narrow cobbled roadway. I had no idea of my location, but when I looked up I saw at the end of the street, a high stone buttress and on top of it what I recognized as the Parthenon. I said to myself “Feet, just take me where you want to go!” and I started to walk.

I went down a block, past what is the ruins of Hadrian’s Library, turned right and kept on going down the narrow lanes until at last I was at the entrance to the ancient Agora. I stepped inside the gate, and stopped, transfixed. In that hot morning sun, what I saw the Agora exactly as it had been centuries ago. There were no ruins, just buildings and cobbled roadways and beyond it rising high against the blue Attic sky, the magnificent Acropolis crowned with it’s shining temples. I suddenly began to cry and could not stop. I knew then, that I had come ‘home’.

Some may say that ancient Greece does not exist. But I know it does. For that whole holiday I explored not only Athens, but other places nearby. And on future trips I would visit almost every important archaeological site in the country, as well as the beautiful islands with their golden sand and the brilliant blue Aegean Sea where once triremes and merchant ships plied their sea-routes.

If you have never been up on the Acopolis, seen the Parthenon bathed in the golden light of sunset, walked the shaded pine-scented groves of the Hill of Nymphs and stood on the Pnyx where the ancient Assembly met, you have not experienced the real Greece. Ancient Greece. 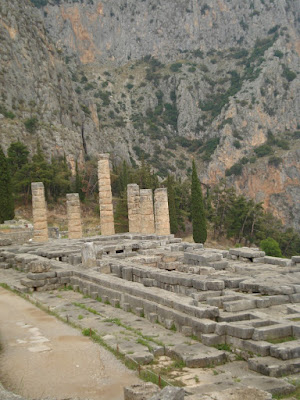 I have had many déjà-vu experienced in Greece such as that first one I had in the ancient agora of Athens. On my first visit to Delphi, traveling by bus with a Greek friend, we arrived at night and threw our sleeping bags down on the hillside, sleeping under a sky so clear and dazzling with stars you felt as if you might reach up and touch them. It was a full moon night, too. Totally magical.

In the morning I went to visit the sanctuary where for many centuries pilgrims came to consult the fabled Pythian in the Temple of Apollo. I, too, followed the rituals: first cleansing myself in the clean, pure waters of the Kastilian stream, then climbing back up the hill to enter the sacred ground. Even now the Greeks treat this site as sacred and demand respect from visitors. You feel the presence of the gods there, but you must see it on a day when there are not hordes of tourists. I have been many there many times. I make a pilgrimage to Delphi each time I visit Greece. And I know the gods do dwell there. 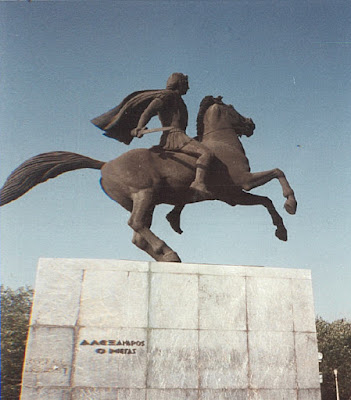 That first visit to Greece changed my life. A couple of years later, after several more visits, I decided to go and live there. It was a big decision because I had to leave a good job and my family behind. But I knew I must go. And I have never regretted it.

I lived in the Plaka, right below the east flank of the Acropolis in what was Athens ancient city. Every Sunday I climbed the steep marble steps up to the Parthenon and sat contemplating, absorbing the atmosphere and feeling the ancients around me.
This time I was on a quest to find Alexander, the invincible Macedonian hero of my teens, the one who I had written about since I was in high school and was once asked if I had really ‘been there and known him and his companions’ because I had such a strong connection with them. In my work-in-progress novel “Dragons in the Sky” which I began writing just before I went to live in Greece, I made that connection. A Celtic girl, acolyte of the Druids, who is kidnapped by a renegade chieftain’s son and finds herself in Macedonia at the time Alexander was recruiting warriors for his invasion of the East. I have channelled Olwen to tell her story. But if you believe in past lives, then perhaps I am really Olwen.

Several times I have walked the ruined streets of ancient Pella, visited Mieza, the school where Aristotle taught him and his friends, explored Dodoni, in Epiros, where Alexander’s mother had lived. And eventually, I even visited the Royal Tombs where the remains of his father and son were found in their tombs. That had to be one of my biggest thrills!

One of my most memorable trips was to the Sanctuary of the Great Gods in Samothraki where I walked alone down the highway through fields of yellow flowers where butterflies flitted in the sun. This Thracian Sanctuary of the Great Mother, one of the oldest in Greece, was visited by Greeks and slaves alike. And this is where Alexander’s father Philip met Olympias and later married. I have visited Samothraki twice and again felt the power of the ancient gods. On one occasion I visited the remains of the small Temple built to honour Alexander and Philip, and dedicated by Alexander’s brother Philip Arridaios and his little son Alexander IV who were named joint kings after Alexander’s death in Babylon 323BC

I have been to other sacred sites, too, including Dion near Mt. Olympus, and I’ve also many of the ancient theatres and had the thrill of seeing the ancient plays performed there. The archaeology and history of Greece is one of my passions.
When I started writing my novel “Shadow of the Lion” I became more and more involved in that ancient world and getting to know the characters from history who I am writing about. I have spent as much time as I can walking in those same places where they had walked, played, studied and lived their remarkable lives. To me, ancient Greece is very much alive and I would challenge anyone who says it is not, though perhaps these are the unlucky ones who have never had the privilege of seeing it for themselves.