I LOVE THE SNOW! 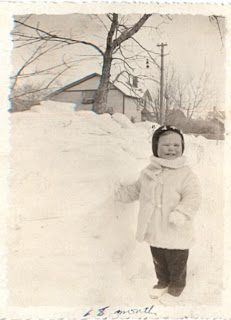 playing in the snow, me at aged 18 months
Estevan Saskatchewan

"One Christmas was so much like another, in
those years around the seatown corner now and out of
all sound except the distant speaking of the voices
I sometimes hear a moment before I sleep, that
I can never remember whether it snowed for
six days and six nights when I was twelve or whether it
snowed for twelve days and twelve nights when I was six.
Dylan Thomas 1914-1953 "A Child's Christmas in Wales" 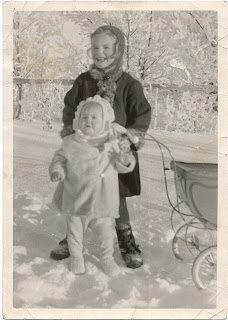 me (age 6) and my little sister Jeanie
taking our dollies for a walk in the snow
Lloydminster, Saskatchewan

I love the snow. So when we had the first snowfall of the season yesterday I felt compelled to go out in it and take some pictures. By today it continued until the snow was deep enough to make snow-men and go sledding. But, as usual here on the "wet" coast, by late afternoon when I finally did go out, intending to take more photographs, it had turned to rain. Now the rain has set in and the snowfall has melted causing a lot of problems with flooding and a slushy mess on the sidewalks and roads. It was pretty while it lasted. I stayed indoors with the fireplace on yesterday and did some work on my Christmas cards, made more notes for my novel, and generally enjoyed a weekend of reasonable leisure. I'm only sorry I didn't get out in today it while it was really coming down, thick white fluffy flakes of it, just like I remember as a child living on the Prairies.

I have lots of happy snow-time memories and so long as I'm dressed warm enough I still enjoy it. However, a storm called "the Pineapple express" is heading our way from Hawaii and the weatherman warns of flooding and torrential rains setting a record for the season. And winter has barely even begun! Enough, already, with the rain. I say "Let it snow, let it snow, let it snow!"

The first snowfall in the park 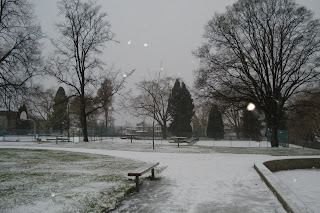 Right on! We got snow, and it's good!

Snow? Aren't you in California?
Ours is long gone, washed away by the Pineapple Express. But today there was a bit of sunshine and tonight a rainbow!

Damn German winter (except on the high mountains of Alps and Erzgebirge where it sometimes does snow).