THE BUSY LIFE OF A WRITER 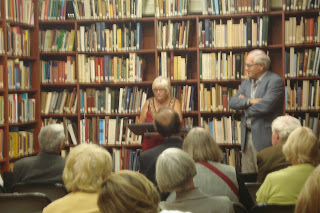 It's been months since I wrote in LIVING THE WRITER'S LIFE.  And yes, it's a very busy life!

First of all, no sooner had Christmas and New Years passed when I was told I'd have to move from the suite I'd occupied for 10 years.  This in itself was a trauma but when I started to look for a new place it was even more nerve-wracking and depressing.  There is a crucial  housing and suite shortage in Vancouver and it's all due to off-shore buyers snapping up houses and paying exhorbitant prices which locals could not afford.  And everyone has gotten so greedy. Imagine asking $1200 for a basement suite!  So for someone living on a pension and considered 'low income' it was a very stressful time. At first I thought perhaps I should put my stuff in storage and go back to Greece but I knew I'd have to soon start edits on Volume 2 of SHADOW so the timing wasn't right.  I thought I'd end  up in a shelter, then a travel writer friend intervened for me and I was shown a suite near where I had been living and I got it.  I moved in the beginning of April but it took a good while to get used to the new place and especially all the traffic noise. But I have adapted and feeling more 'at home' now.
Finally I am able to get back to some more writing, although I have been working on the Greek Island's ebook guide and have completed the Saronic and Ionian Islands part. 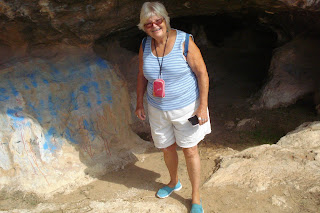 Visiting the Cave of Eurypides on Salamina island

Last week I also started the final proof edits for SHADOW OF THE LION: THE FIELDS OF HADES and it is due to be published in October. If' you've read Volume One BLOOD ON THE MOON I know you must be anxious to get this second part of the book. And I can assure you it is one that will keep you turning the pages! 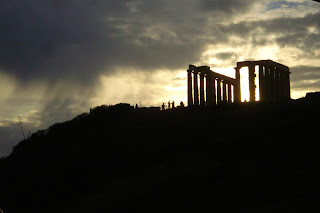 The Temple of Poseidon 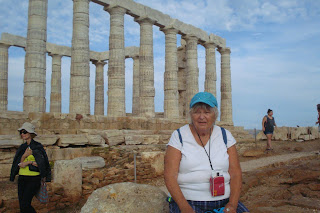 I got some inspiration from Lord Byron when I was visiting Cape Sounion
Meanwhile, I am planning a trip to the Islands, starting with Corfu. Flying to London first, on September 4, and visiting briefly with cousins in Caerphilly, Wales, then on to Corfu and a bit of Ionian island hoping until I reach Athens. Then later I hope to visit Crete and a few other islands including my favorite island, Naxos. 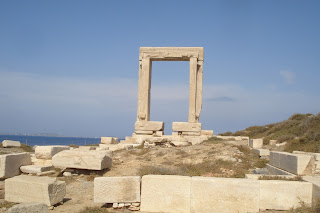 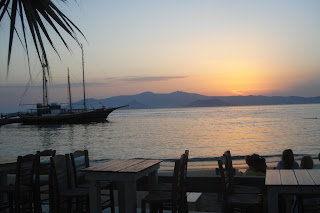 It's nice to be back in blog writing mode and I hope you'll see more of me in the future.