On June 20 I had a successful book launch for SHADOW OF THE LION: THE FIELDS OF HADES. It was held at the Kitsilano branch Public Library.  A nice group attended including the new Consul General of Greece, Mr Thanos Ioannou and his wife. 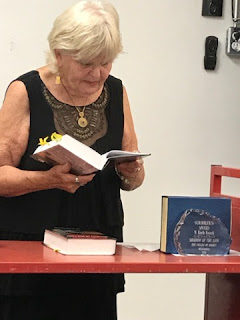 Reading from The Fields of Hades 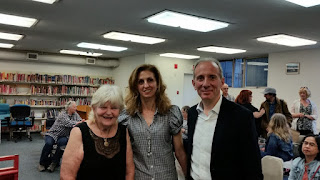 The Greek Consul General Mr Thanou Ioannou and his wife.

I've been doing a lot of book promo this past month.  On June 25 I had a table at GREEK DAYS on West Broadway in Vancouver and spent a long day ( 11 am - 9 pm) enjoying chats with passersby and a friend I'd invited to join the table with me.  Lots of people stopped to ask about my books and I sold three which was great. 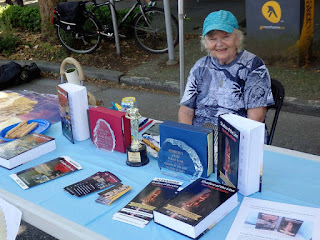 On Canada Day (July 1, Canada's 150th birthday!) I had a table at the Book Fair at Ft. Langley.
I shared the table with Wayne Gatley from my Scribblers group.  It wasn't as busy as Greek Days but a few people stopped by to check out my book,  no sales though. But it was a nice way to do promo and I enjoyed the day. 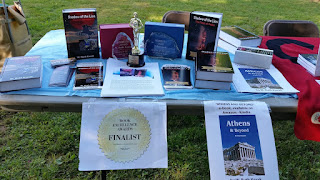 More readings coming up.  On July 15 there'll be another table display at Queens Park in New Westminster and on August 5 I'm dong a workshop/reading for the Pt. Coquitlam Tri-City Wordsmiths.  Hope to get a few more readings/workshops ofer the summer as well.
Posted by Wynn Bexton at 10:46 AM No comments: