The Celts and the Greeks: Connecting the Dots

In researching my work-in-progress novel 'DRAGONS IN THE SKY'  I have tried to connect the Celtic people with the Greeks.  In the story, Olwen an acolyte of the Druids, is snatched from her village by a renegade chieftain after she witnesses him murder his brother. He takes her on a ship across the Narrow Sea using her as his talisman as he makes his was eastward across Europe and south toward Macedonia where he hears a king is recruiting an army.  Near the boarder of Macedonia she is rescued by a young hunter who is Alexander.  But how much connection was there between the people of southern Europe and the northern Celtic tribes? 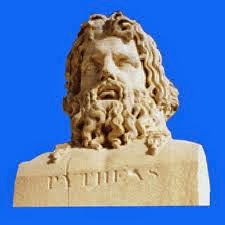 Pytheas of Massalia
In the 4th century BC, a Greek geographer and explorer from the Greek colony of Massalia (modern day Marseilles) made a voyage of exploration to northwestern Europe. In this voyage he travelled around and visited a considerable part of Britain. He's the first person on record to describe the 'midnight sun". The existence of an area where the nights are very short in summer and the sun does not set at the summer solstice was already known. Reports from this country of the Hyperboreans had been reaching the Mediterranean for some centuries, but Pytheas is the first known scientific visitor to report the arctic polar ice and information of the Germanic tribes. His account of the tides is the earliest relating them to the moon. 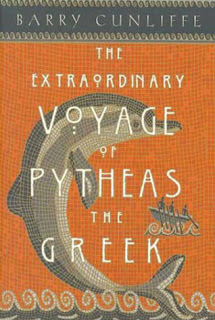 ﻿
(this book is available on Amazon)

Pytheas was a Greek geographer. He wrote a book about his voyage but it has not survived. All we have are references in the works of later classic writers.  Where he started his voyage is a mystery because in those days the Carthaginians had closed the Straits of Gibraltar for all ships from other nations. He may have travelled overland or sailed only at night. He travelled to Cornwall, w hich was then the source of tin, and there he studied and wrote about the production and procession of tin. He circumnavigated Britain, sailing north to an island called "Thule". It may have been part of the Norwegian coast although Iceland, the Shetlands and the Faeroes have also been identified by historians. He noted that Thule was an agricultural country that produced honey. It was the place where the sun went to sleep and  the congealed sea began.  He spoke of the waters around Thule being like a 'marine lung' which actually means jellyfish. Modern scientists believe that he tried to describe ice cakes that are formed at the edge of drift ice. He noted that the inhabitants of Thule ate fruits and drank milk and made a drink out of grain and honey (mead.) 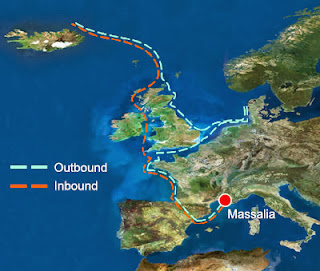 After completely his survey of Britain (called Albion then), he travelled to the continental North Sea coast. He may have also visited the Baltic.  And he visited an island which was the source of amber (probably Helgoland).

He wrote a book about his voyage but that has not survived. We only have the remarks of others, among them Strabo who (unjustly) called Pytheas a liar.
Posted by Wynn Bexton at 8:48 PM No comments: