One of the things I love about travel are the little surprises that come along the way.  The first part of my journey this year was to visit England and Wales.  Mainly, I wanted to see my cousins in Caerphilly, and to stop by Salisbury for a quick peek at Old Sarum, in hopes it would inspire me as I begin to rework my old novel, "Dragons in the Sky". ( Old Sarum is the setting for this Iron Age Britain tale.) While there, I was lucky enough to see Avesbury and Stonehenge, thanks to the generous offer of a guide, Keith, who writes for my on-line 'zine, Travel Thru History. 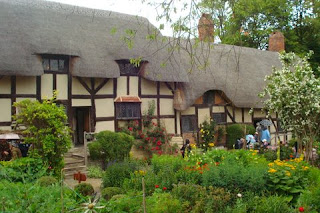 Anne Hathaway's Cottage
After my visit Wales, my cousin Chris drove down from Worcester to pick me up for a short visit to his town.  The next day, we went to Warwick Castle which was another highlight of my holidays.  But one of the surprises was, on route back to his place, we passed Stratford-upon-Avon and I mentioned how I'd always wanted to see Anne Hathaway's cottage, the home of Shakespeare's future wife.  Chris, who is always obliging, said 'No problem', so we made a side trip to this historic site.

I've  been a Shakespeare fan since I was 13 and saw my first stage production of "Richard III". Up to then I only knew about Shakespeare because I'd lived in Stratford, Ontario, on the Avon River where everything in town was named for the Bard.  Nowadays, I often go to see productions of Shakespeare, especially each summer, here in Vancouver, at Bard on the Beach.

Anne Hathaway, who was destined to become Shakespeare's wife, grew up in a small village just to the west of Stratford-upon-Avon, Warwickshire, England.  The farmhouse where she lived in now a major tourist attraction.  She married Shakespeare in November 1582 when she was pregnant with their first child.  There was a fairly big age difference, Anne was 26 and Will was only 18.  Some historians called this a 'shotgun marriage', however it seemed that Will had planned to marry her all along although there was a story that he had another Anne in mind and was forced by Hathaway's family to marry their pregnant daughter.  Whatever the reason for their marriage, he didn't stay in Stratford for long, as he went to London to pursue his career of playwright, only returning to Stratford on occasions, although once he retired from the theatre he did return to live with her in Stratford. 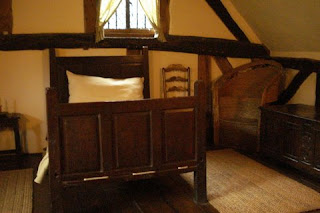 A Bedroom in Anne Hathaway's House
Anne and Will had three children, Susanna who was born in 1583, and twins Hamnet and Judith born in 1583.  Anne outlived Will and when she died August 1623 at the age of 67, she was interred next to her husband in the Church of the Holy Trinity, Stratford-upon-Avon.

The Anne Hathaway Cottage is a picturesque little thatch-roofed house just as I'd imagined, surrounded by a lovely typical English country garden.  We were able to tour the house and I took a few photos including one of Shakespeare's courting chair.  It was a quick visit, but a nice little bonus on a trip that had been so full of wonderful sites and opportunities. 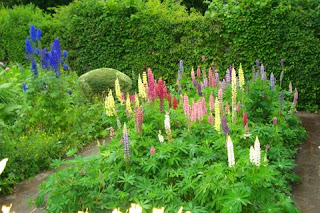 Now I'm back I have a lot of material for travel stories so while I am waiting to resume the final cuts of my novel, Shadow of the Lion, I'm trying to get caught up.  The first day back I pitched two ideas to a print magazine that were accepted and since then, I've pitched ideas to a couple of on-line travel magazines and they have also shown interest.  So now the holiday is officially over, I'll be grounded and focused on all this new writing. 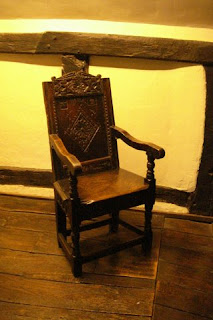