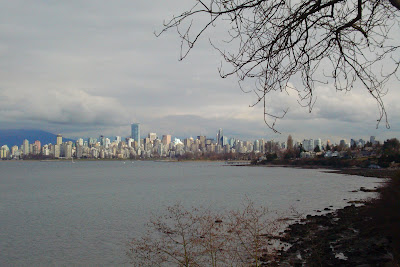 CITY SKYLINE
I've finally got an evening at home so I'm trying to catch up with everything from bill-paying to blogs. It's been a busy time for me, but fortunately it's starting to wind down and my classes will end in a couple of weeks for the Spring break. At this point, although I enjoy doing them, I am looking forward to having lots more time to myself in order to catch up with my own writing.

I am running behind in my schedule for finishing SHADOW OF THE LION, due to the fact I am so busy with classes, spending a lot of time travelling on buses across town a couple of times a day, and when I do get a bit of time off I'm trying to catch up with housework and other mundane chores.

Yesterday I grabbed a bit of time to do some editing and tonight I'll finish that. I'm still not satisfied with the last chapter segement I wrote for SHADOW, but I'll let it go until I workshop it at my critique group in a couple of weeks. I'm anxious to get on with the rest as I actually only have six more chapters and the Epilogue to write and then I am finished! 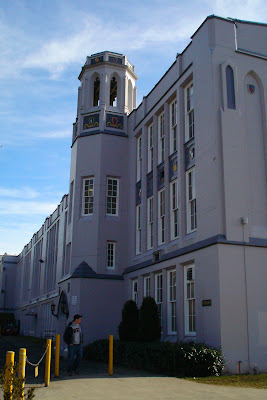 POINT GREY HIGH SCHOOL
What else have I been doing with my time? Well for the last six weeks I've even been teaching classes on Saturday mornings -- two kid's creative writing classes (ages 11 - 13 and 7 - 10) at this lovely old art-deco school on the west side of town. It's been a challenge and a lot different than doing the adult classes, but I was thrilled to get the job as I know what it's like to be a kid who is dying to be a writer. When I was in school there was no such encouragement. There's some pretty bright, talented youngsters in these classes although there are also a few of them who are there simply because their parents wanted them to improve their English. (This is where the challenge comes in!) However, we've had fun and I've seen a few of them turn in some well written stories. One of the most fun days was our playwriting day when they had to write and perform "The Three Little Pigs". Lots of laughs that day. We also did a day of pretending to be journalists and interviewing each other. Today was writing about other places, travel writing and how to write historicals. Some of these kids are pretty well travelled so they had some interesting tales to share.

Besides this, and my 3 memoir groups and 1 night school travel writing class, I am writing 4 pieces a week for Planet Eye which keeps me busy.
Needless to say, my blogging has been sporadic and I haven't even had much time to read other people's blogs. I do look forward to returning here more often very soon. And probably in a day or so I'll be ready to post another 'Progress Report." 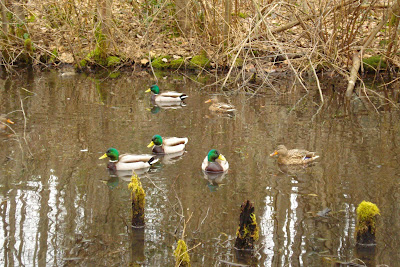 DUCKS LAZING IN A POND 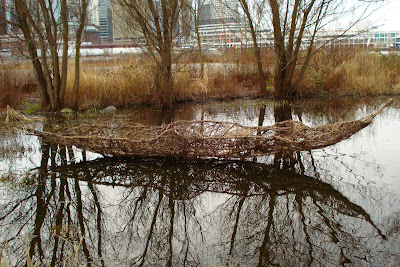 I have had some days off over the weekend and tried to get caught up with my writing on "Shadow of the Lion". I was trying to work out the last part of the chapter and having some problems with it. Then on my way to meet my friends on Friday night I had the whole scene including dialogue worked out in my head. Trouble was, I'd forgotten to bring my notebook. I always carry a little notebook for moments like that and there I was without a thing to write on. Of course, by the time I got home later I'd forgotten most of what I'd had in my head, although I do have a gist of what I will write.
One of the things I always tell people in my writing classes is to 'always carry a notebook'. I don't know how many times I'll get a brain wave while waiting for a bus or riding on the bus and especially, like to day, when I go out for a nice long walk. 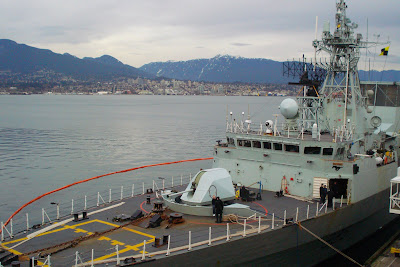 HMCS CALGARY
I had ships on my mind today. Triremes, sailing into the harbour of Ephesus. War ships, part of Ptolemy's fleet. And strangely, it seemed to turn out to be a day of ships. First I discovered the odd little vessel made of twigs and branches floating on the pond at Crab Tree Park. A most peculiar discovery. Then I walked down to the Convention Centre (which in itself is built like a huge ship with sails) and there was this Canadian warship HMCS Calgary. Another unusual sighting.

I had hoped to get a lot of my novel figured out in my head today and yes, I did have a notebook with me just in case. But I was troubled by some other thoughts that kept getting in my way and was unable to focus on Shadow. Anyway, I did sort something out. I realized that the scene I have already written is lacking in some important ingrediants. So when I got home tonight, I did a few hours of research. Yes, I have made a slight error in what I wrote so now I'm trying to figure out how to fix it but after I sleep on it I'm sure it will come clear to me.

Meanwhile, I have tomorrow off -- no classes til Tuesday -- so I can catch up and at least try to finish this one important scene that leads off Part VII and the finale of the novel. 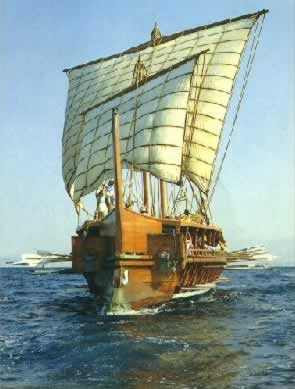