I BELIEVE: Going for the Gold. 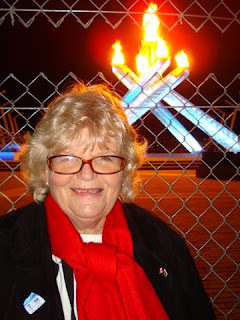 Me and the Olympic Cauldron


“I Believe”, the theme song of the 2010 Winter Olympic Games keeps running through my head. Imagine Canada winning gold. Believe in and imagine all that you can achieve. Just IMAGINE and BELIEVE!

It's been a thrilling week so far. I've been caught up in the festivities and sports activities going on, writing one or two stories a day for Planet Eye Traveler. And still keeping up with my six classes a week. So there hasn't been any time now to work on Shadow of the Lion. You can read some of the stories at http://www.planeteyetraveler.com/travel/north-america/vancouver > or in the special edition City Guide http://guides.planeteye.com/vancouver

I've had a lot of fun braving the merry-making hordes of people who have flooded the city. I even had the luck to go to one of the medal award ceremonies, although I haven't actually been to any of the sports events. There's lots going on for free in the city and I've tried to cover as much of it as possible (without waiting in lineups for two or three hours!)

What has impressed me is the great Olympic spirit shown in the city, the hospitality and the feeling of extreme national pride. The colours are everywhere: Red and White, O Canada sung spontaneously in the midst of cheering crowds. But it's that song "I Believe" that stirs me every time I hear it. And the other Olympic slogan “Imagine!” And I imagine my novel, Shadow, being finished and published and winning a gold. I believe it is good enough!

I've occasionally, at random, looked back at pages I had written a long time ago, and felt a stir of deep emotion and wonderment. Did I really write that? It's great! And yes, I believe that when it is all finished, it will be great! Like the athletes, I’ve been ‘training’ for this moment, when Shadow of the Lion is complete and ready to be presented to the world. Yes, writers ‘train’ like athletes, practicing, rewriting, workshopping, striving for their personal best, just like athletes, imagining that they will achieve their goals. Believing!
At the end of this week, the 2010 Winter Olympics will be over and just a memory. Then I will go back and finish my novel. And I believe it will be a success. Yes! I'm going for the gold!
Posted by Wynn Bexton at 4:49 PM 6 comments: