WHAT BOOKS INFLUENCE YOUR WRITING? 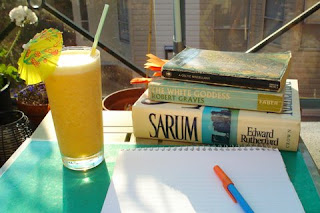 What books do you read while you are working a new piece of writing?  When I was writing Shadow of the Lion, I was deeply influenced by the writing of Mary Renault.  I have read all of her books going back to the very first one she published in the late '30s, but her Greek stories were what really captivated me.  I read and reread her Alexander trilogy: Fire From Heaven, The Persian Boy and Funeral Games as well as others like The Mask of Apollo and the two books she wrote about Theseus, Bull from the Sea and The King Must Die.

After I read Funeral Games I had felt somewhat disappointed. It seemed to be documented rather than developed into the usual exciting and colorful historical fiction she had written in the other two of the trilogy. (It was the last book she wrote and she died a couple of years later). I had been fascinated by the story of Alexander since I was sixteen and read everything I could about him (mostly history books) and realized there was much more to the story than what was conveyed in Funeral Games.  So that is the reason I chose to write Shadow of the Lion, which followed the same historical period as Mary Renault's Funeral Games

I recently went back to work on the novel I'd been writing before started Shadow of the Lion.  I had spent a couple of years researching and writing Dragons In the Sky before I got discouraged with it. So I set it aside to write Shadow, first intending to write the Alexander story as a young adult book. However, after a year of working on it, I realized that it was too political a story for a young adult book, and was advised to start over, which I did, writing it in a multiple point of view. This allowed me to expand the story, develop characters and deal with the political plot to its best advantage.

Now that Shadow is finished and in the hands of an agent, I have gone back to work on the old manuscript of Dragons.  I had conceived the idea for it back in the late '70's and did some research, starting the writing in 1979.  It's a Celtic tale, taking place in the 4th century BC, Iron Age Britain, and there is an Alexander connection.  What makes this different from Shadow is that the story is almost like a past life regression. I heard this girl, Olwen, telling me her story and it is therefore written in first person with a distinctive Celtic lilt to the prose.  Some of the chapters are written in Bardic verse. Unlike Shadow which follows a historically recorded plot, this novel is purely fiction.

What books influenced me in the writing of this book?  When I started to review my old notes, I realize that a great influence on this story was Pauline Gedge's The Eagle and the Raven  and also Mary Stewart's Hollow Hills.  I'd like to reread those books again because it's been years since I first read them. They helped me get the 'flavor' and the cadence I wanted for Dragons in the Sky even though they are a slightly different time frame than Dragons.

One thing I found when I referred so frequently to Mary Renault's books when I first started writing Shadow, was that my writing style was influenced by her writing. I began to see too many "Renaultisms" in my own writing, and had to be careful that I was not 'copying' her style. But out of this exercise I developed my own cadence and style like a student painter learns to write from the Master. I was thrilled when my late dear friend Roberto, an ardent reader, said to me "I like your style better than Mary Renault's".  That was a huge compliment!  And now I am told that Shadow is what Funeral Games should have been!  What an honour!

What books do you read that might influence your writing?  And have you found that these authors have influenced your own writing?
Posted by Wynn Bexton at 4:31 PM No comments: