As the Greek's say "sega, sega!" Easy, easy.  And that's how I'm approaching the last bit of work on Shadow of the Lion. It's taken me awhile, as I've only been home 3 weeks from my travels and have been caught up in new classes, some literary events and a bit of recovery from jet-lag and culture shock.  But I'm slowly starting back to work on the finale of the novel.  Who would have thought it would be so difficult to write this last bit? 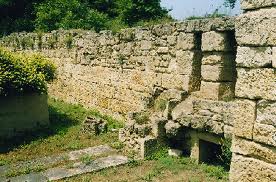 Garrison walls, Amphipolis
﻿
Where am I now in the story?  I am in the garrison of Amphipolis.  There has been a lull in the action as far as the threats against Roxana and Iskander.  The new garrison commander, in charge while the evil Glaukias is away, has shown some respect and tolerance to them and has allowed the boy and his companions some freedom.  But watch what happens next!

I found that I was dissatisfied with the last chapter segment I wrote, so I've been trying to figure out how to improve it, editing and adding some new bits.  Still not certain it's what I want, but for now I'll let it go and move on to the next bit.  As usual, I always find it hard to write the transitions between chapters or chapter segments so although I have some of it written in note form, I haven't launched into it as yet.

Meanwhile I spent some time writing travel stories and have to polish up one about Pt. Townsend, WA to send off.  And of course I have started submitting to The Vancouver Guide again.  Still, I have a lot of travel stories yet to write so I must squeeze these in between what work I am doing on Shadow.  Fortunately I've had a bit of extra time to do some of it, but it all requires DISCIPLINE and FOCUS which are somewhat difficult to achieve (for me, anyway!)

But, I will continue to post my progress reports and very soon I hope to be able to write THE END.
Watch for more chapter segments to come.
Posted by Wynn Bexton at 2:01 PM No comments:

I don't generally consider myself a poet, but somehow lately I seem to have found myself in that category.  A few weeks before I left on my trip,  I was invited to appear on a Co-op Radio show, Wax Poetic as their guest for the show.  I was very honoured to be invited as this program has some of the best local poets as their guests.

For my half hour reading, I selected poetry that was connected to my historical fiction writing.  First I read selections from my work-in-progress Celtic novel "Dragons in the Sky" which has some chapters written as 'stanzas' in Bardic verse.  Next I read selections from my Alexandrian Collection: Hymns for Gods and Heroes which was written some time ago when a poet friend challenged me to write a collection of poems about Alexander's life, parallel to my novel "Shadow of the Lion".  I followed that by reading a short passage from the final chapter of my novel.

The radio readings were a great success and that put me in an entirely new literary category when other poets heard me read.  I was invited to appear as guest poet at a Poetic Justice reading when I returned home from my travels.  This is a poetry reading group that meets on Sundays in New Westminster (a city just next to Vancouver.).  For this reading I again chose stories that showed my interest in historical fiction writing (including several I had read on the radio show) as well as travel poems.  While I was away in Greece I was urged to write some new poetry and although I can't 'write on demand' I somehow managed to at least produce two new poems, which were included in the collection I read that day.  I had also included (in the historical poetry) the opening monologue from my play about the lyric poet Sappho, "House of the Muses".  I had shelved this almost-finished work a couple of years ago after it was panned at a playwright's workshop I had been attending.  Surprisingly, when I read this monologue (which I had planned to rework), it went over so well that an actress in the audience actually asked me if she could perform it some day!  (It just goes to show you that sometimes first opinions are not necessarily everyone's opinions!)

Yesterday I went to Poetic Justice again and read at the open mic.  This time I read some poems dedicated to my late friend Anibal as this month is the anniversary of his death from cancer 5 years ago.  Again, my poetry was enthusiastically received.

All this 'waxing poetic' has really empowered me.  Maybe I should take myself more seriously and write more poems?  Usually I have written little snippets when I am sad or lonely or going through some kind of personal dilemma (broken love affairs and the like).  Poetry doesn't just seem to 'flow' out of me the way prose does.  But perhaps I'll pay more attention to the Muse now and see if she wants me to write a poem or two.  I'm even thinking of becoming a more frequent reader at the open mics.  There are a lot of poetry venues around town.  It's just a matter of finding the time and courage to attend.
Posted by Wynn Bexton at 3:50 PM 1 comment: