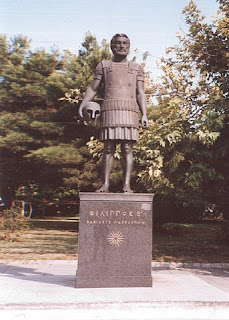 Statue of Philip II in Thessaloniki, Greece
﻿
A SONG FOR PHILIP, KING OF MACEDON
This is a song for Philip, son of Amyntas
that noble warrior of Macedon
whose bloodline come from Herakles.
Warriors, shout a paean for him:
Raise your swords to honour him.
Musicians, play for him
on your sistrum, cymbals and drums.
Maidens, dance for him.
Singers, laud him,
for he is Makedon’s invincible hero.
He is fearless and energetic.
He is cunning and wise.
Poets, tell his tale.
Strike up your harps in praise of him.
There is no other man who can compare
With Philip, the Lion of Makedon
I've been working on the chapters of Dragons in the Sky where Olwen is introduced to King Philip.  This is the first time I've had a chance to actually write about him as an active character in the story other than what was mentioned and remembered about him in Shadow of the Lion.  So I'm not sure that I have it quite right yet. The dialogue I wrote today needs to be a bit edgier I think.  Sometimes it takes a while before you can get your head right into a character and Philip is a complex one— a brilliant soldier and strategist but also a bit of a rascal and rogue who had an eye for young girls and fresh new cadets. He and Alexander had a strained relationship as father and son, and his bitter quarrels with Alexander's mother Olympias are well recorded.
So what does this innocent young Celtic girl think of this man? She's introduced to him by her new guardian Theon, the physician. But what will her relationship be with the king? In this chapter he has questioned her about her people, mainly about her clan and ricon and the warriors. What were they like? Was it true they fought naked and took the heads of their enemies?  Philip is planning to invade the northern Celtic tribes at some point so he needs all the information he can get about their battle tactics. Olwen doesn't know much though but she describes her clan life and what the hill forts are like and what she knows about the warriors. And at a later part of the novel when Philip is wounded and almost loses his leg, Olwen will help Theon tend him because she knows the healing arts and acts as Theon's assistant.
﻿
Posted by Wynn Bexton at 6:17 PM 2 comments: