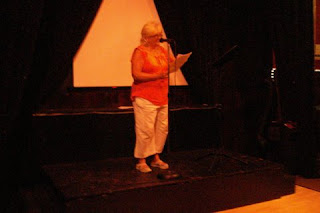 Reading poetry at the Heritage Grill
It seems my writing life has taken a new turn these days.  While I am waiting to resume more edits on "Shadow of the Lion", I have been called upon to read some of my poetry.  Last weekend at the Heritage Grill in New Westminster, I read 3 poems that were published in a new anthology "Sudden Thunder" with thanks to Candice James, poet laureate of New Westminster who has become my new poet mentor.  I had not taken myself seriously as poet until Candice heard some of my work and has been encouraging me to read in public.  Not that I haven't produced or read before, but my main genre in travel and historical fiction, and poetry doesn't always 'happen' for me except unexpectedly.
Now I am encouraged to enlarge my collection, mainly one I am working on which will be titled "Songs for Erato" (Tragoudia yia Erato)- poems written in or about Greece.  I already have quite a few in the collection including a previously written collection "Songs for Gods and Heroes", written as 'hymns' or hymnos style when I was challenged some years ago by a Greek American poet friend to write a collection about Alexander the Great. There were written for two voices to be accompanied by music (such as a flute) and were presented at a reading some years ago at the Burnaby Art Gallery.  I will also include a couple of lyric poems from my play about Sappho, "House of the Muses", as well as some new poems I wrote the last two times I was in Greece.
I'll be reading on the street in New Westminster next Sunday and I'm one of the feature readers the following week at Poetic Justice at the Heritage Grill.
While I am waiting to finalize the work (edits) on "Shadow" and retyping my old Celtic novel "Dragons in the Sky", I will rework some of my poems to get them ready for the collection I am hoping to eventually publish.  Who would have thought?  You know that old saying? "You're and poet and you didn't know it!"  Well, that's me.  A new way to express my thoughts.  And I'm enjoying it! Now if only I could get the Muse to co-operate!

Here's a you-tube video of me reading one of the poems: "Socrates Prison"