It was a lovely autumn day today. I enjoyed a walk through the neighbourhood, scuffing up leaves on the sidewalk. The colours seem more vivid this year and after a few days of rain and gloom, the sun was bright. All the colours looked brighter than usual. And, after a couple of stressfull days, feeling out-of-sorts and very tired, today I felt mellow and calm. 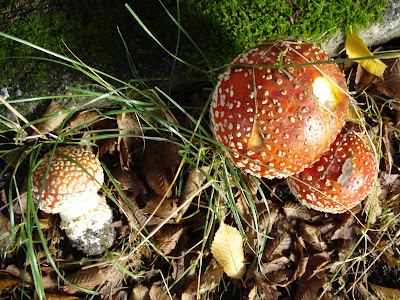 On my walk, I discovered these Amanita mushrooms growing on the curb. These are poison "magic" mushrooms, just like the ones you see in kid's fairy tale books. I was on my way to take some photos for a story I was writing about the newly restored Vancouver Cultural Centre, "The Cultch", which is a turn-of-the-century former Church, now one of the best venues for the Arts in the city. You can read about it in the Vancouver Guide, www.planeteyetraveler.com


I'm in a habit of taking my camera with me most of the time now to capture the moments. Ever since I took the Field Photography classes during the summer, I'm getting the most out of my camera, trying different angles, subjects, settings etc. And for my weekly stories that I write for the Vancouver Guide it makes me feel more like a roving reporter. 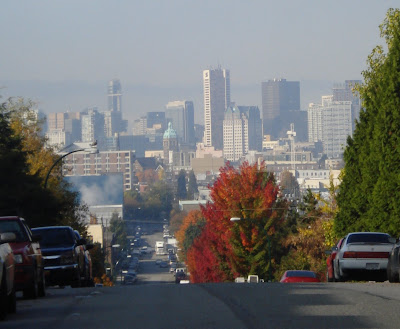 Here's a nice view of the city with the autumn trees showing it off. That's a view down the street where I used to live. And that tall, thin building in the centre with the green dome roof is the old Vancouver Sun building where I used to work when I was a copy-runner who had dreams of being a reporter. (Now I'm the 'roving reporter' taking photos around the city.)

This weekend is the Surrey International Writer's Conference. I'll be volunteering all weekend as I usually do, and introducing writers who are doing workshops. I'll write more about it later on. It's always an exciting event and a chance to talk to writers, editors and agents. Unfortunately Shadow of the Lion isn't quite completed as yet, though I had wanted it to be all finished by this time. I was disappointed to find out that being a volunteer meant I couldn't make an editor/agent appointment. So I am hoping I can get to talk to one in the hotel lobby or at one of the workshops, just to send out some feelers about my novel. One thing I'm happy about is that one of the presenters I'm introducing has just had her first novel, a historical, nominated for three top literary prizes. That means historicals are back in the limelight, and that's good news!

Good luck with the conference! Doesn't sound fair that you can't make an appointment just because you're volunteering. I hope there's a good reason for it. Historical fiction is hot these days. Best of luck to you. And, I'm sure you'll finish your novel soon.

Thanks Adrian. I'll be posting soon with details of the conference. My head is crammed full of info and inspiration!

What lovely photos! Autumn seems slow to start in the UK lately. Good luck with the conference and the novel. Looking forward to reading your posts about it.