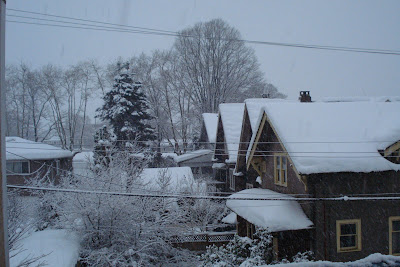 View From My Window

This is the exact view I have from where I sit at the computer. These days I've been spending a lot of time here, working to deadline to complete Part VI of SHADOW OF THE LION.
I have reached the "Interlude" of this section and although some of it was previously written, I have to fill in the details before it's complete. Yesterday I spend several hours just making notes. Today I've had a late start, decided to sleep in and cancel my plans to go downtown shopping due to the deluge of rain and slushy streets. And here it is almost 1 p.m. and I haven't started writing yet!

I had projected a goal to finish the whole novel by the end of 2008, however due to seasonal distractions (and my own expert ability to procrastinate and find other things to do instead of writing -- checking my emails a dozen times a day, for instance), I am behind and instead want to finish Part VI before the end of the year. Not much time left. I'd best be getting busy!

So far, this massive manuscript (which I edit and workshop as I am going along, is pretty nearly 'final draft'. I will have a lot of cutting to do though, once it's done, as it is much too long to be accepted. I'm not too worried about that part though, as I find editing quick and fairly easy.
My critique group has been a big help as well, because sometimes you just can't see for yourself what is okay and what needs to be eliminated or improved upon.

Writing a novel doesn't happen by osmosis. Some people think it will only take them months to write, and some types of books do take months. But a complicated historical fiction novel, written from a historic plot , requires a lot of research. And this particular story has been made more complicated by using multiple points of view and trying to stick as close to 'facts' as possible, in the political sense of what was happening at that time in history, and the reasons why it ended of Alexander the Great's dynasty.

It's been a long journey, but an enjoyable and educational one. And I've been lucky enough to have contact with Classical scholars and to see many of the sites I've described in the story.
The characters have become part of my world and it is difficult to say goodbye to them when the time comes. To me, they are real and we have developed a relationship as I grew to know them intimately. Most of the characters in the story actually lived at that time. There are only a few of them who are fictional, and they are just as dear to me as they are my own creations.

The novel will been written in seven parts, although when the final cutting is done I think it will be shortened to just three or four. Each 'part' has an Interlude (which I may change to "Epitasis" (Greek for: "increased intensity"), the part of a play (Greek drama) developing the main action and leading ot the catastrophe (and that's a Greek word too!). I'll then change the "Parts" to "Acts" as in a drama, because this story is very much a Greek tragedy.

So, now I'd better get back to work. The Interlude is set in Alexandria, Egypt and Pergamon, Asia Minor. (I can't be in Chile, Cuba or Mexico with my friends right now, so this is my 'escape' to an exotic place.)

The following is an excerpt from the final chapter of Part VI taking place after Iskander (Alexander's 7 yr old son) his Soghdian mother Roxana and his grandmother, Olympias have been trapped all winter in the sea-coast fortress at Pydna (located on the north east coast of Greece, south of today's Thessaloniki.) Spitama is the half-breed Scythian horse master who is a friend of young Iskander. "Tempest" is Iskander's horse. 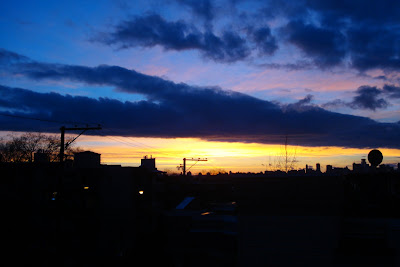 In the pale light before the dawn Iskander slipped past the dozing guards and made his way out to the barracks yard. The compound was deserted and the low-roofed stables empty save for a few horses. Most of horses had been eaten during that bleak winter; only royal steeds had been left unharmed though they were half-starved. Spitama had kept them groomed and rubbed down, still their coats were dull, their skin stretched over protruding bones.

He found Spitama sprawled on the hay still asleep. Tempest was tethered nearby and neighed when the child approached. “Shh Tempest...” The horse's ears went up at the sound of his voice. “Quiet, boy...You’ll wake the guards...”

Tempest nudged him, the breath from his nostrils warm against the child’s cheek. Iskander stroked the horse’s nuzzle. “I have nothing to give you, boy . There weren’t even crumbs to bring.” Tempest dipped his head so his forelock fell between his limpid dark eyes. Iskander ran his hand along the horse’s neck. He felt safe now that he was in the stable with Spitama and Tempest.

The horse snuffed the child’s hair and gave a soft whinny. Spitama woke to the sound. He sat up, looking surprised to see the child. He sucked in his breath through his lower teeth. “Tsss! Poh poh...little Captain...you should not be here...”

“You must go away now before all the guards are at their posts,” Iskander urged him. “You will die if you stay here.”

Spitama scrambled to his feet. He looked thin and pale, shivering in his tattered cloak and soiled clothing. He peered at the child sharply, “ What do you mean go? I can not leave you. And where would I go even if I could leave?”

“Go to Thessaly to your father‘s people. Take Tempest...”

Spitama studied him, frowning. ‘Leave ? How can I?”

“You must!” Iskander insisted. “Ride away now. Fast! Fly! Fly from here...Or they will kill you. Don’t you know that?”

“Fuck them all,” Spitama burst out. “I’ll not leave you, little Captain.”

Iskander was trembling. His voice shook even though he tried to sound brave. “If I order you to go, then you must.”

From that day long ago when Spitama had rescued him on the path at the sea camp in Thrace, he had counted the Scythian like an uncle or older brother.

His command struck Spitama speechless. “Well...”Spitama stammered. “So you are! But as the gods are my witness, I will not abandon you willingly. And if I go, I promise it will be only to seek some help. Perhaps I can rally my father’s kinsmen...”

“Just go!” urged the child. “Tell the gate guards you’re going to Pella with a message for Kassandros...Tell them Alexander commanded you...When they see you are riding my horse they will let you pass.”

“No. You must go alone. I can not leave my mother.” Iskander reached up to stroke Tempest’s neck and felt a sudden pang of anguish. “Gods speed, good friend...”
Tempest’s nostrils flared and his black eye rolled sidelong. He gave a whinny, as if in farewell.

Spitama’s face was sombre. “When you are king, little Captain, you will avenge all these wrongs that have been done here. The base and wicked will die; the brave and just will triumph.” He reached out and drew the child against him. “Your father was a great man and you will be too. Perhaps all that has come to pass was meant to be, your moira, the shape of your Fate that will let you be strong , so that when your appointed time comes, you will be as great a hero and as beloved as your father was. You must not be afraid, or give up hope. For the gods will show you the way and protect you.”

“How will I know my moira?” Iskander asked.

“By an oracle, or some prophecy being fulfilled -- some sign. Then you will know the task that the gods have allotted you. And you will reap the glory.”

Melancholy filled the child, cold as winter snow. He did not speak, but laid his head against Spitama’s breast.

“Don’t forget that, little Al’skander.” Spitama bent to kiss him, then took the reins from the child’s hands and mounted the horse.

“Swear me an oath that you’ll not come back lest it’s with an army.” The child’s voice trembled with emotion though he tried hard not to cry.

“I swear...I will remember you and do what I can to help you. May the gods protect you, little Captain.” Spitama spurred Tempest lightly with his heels and rode out into the barracks yard.

Iskander bit his lip to keep himself from bursting into tears. “Send me word, if you can. May you live long...”

Outside, dawn was breaking touching the snow peaks of Mount Olympus with a pink glow. Iskander stood by the stable door and watched as Spitama rode Tempest toward the citadel gate. He heard the sentry cry out and worried that the guards would not allow him to pass. At the gate, Spitama wheeled Tempest around and looked back, lifting his hand in a salute. The sentries opened the gate. Spitama dug his heels into Tempest’s flank and galloped away.

A flood of tears coursed down the child’s cheeks. He stood awhile trying to compose himself, then crossed the barracks yard, stopping at the fountain to splash water on his face so his mother wouldn’t see he had been crying.

Wynn, loved the excerpt! I think you have a great idea there of dividing the story into parts and labeling them to correspond to a Greek drama. That will look truly awesome in print.

One line stood out to me:

The child’s voice trembled with emotion though he tried hard not to cry.

Maybe this would be stronger if you did not mention "tried not to cry" but instead showed a contrast between steely eyes (trying not to cry) and trembling voice (about to cry). Let us infer the rest.

Otherwise, I was quite drawn into the story and really enjoyed the scene. You give a clear sense of what, when, where, who, etc. Your writing is vivid and cuts straight to the heart of the scene (rather graphic way to put that, but the story is a tragedy so I'll go with it).

Loved the photo. Snow is cool!

Adrian, I always appreciate your comments and suggestions. Most of these bits haven't been workshopped yet so can do with a bit of tweaking here and there. I'll certainly take a look at that particular line. And please feel free to comment on any others in future. "Drama" and "Tragedy" are the real words for this story, that's for sure. And I do think it will be a bit unique if in the final draft I set it up as "Acts" and 'scenes' with the "Epitasis" at the end of each. Anyway, I'll see. I note in Margaret George's "Memoirs of Cleopatra" she has the parts marked as 'scrolls' which is quite effective.