PROGRESS REPORT # 46: PUTTING A FACE ON THE VICTIM 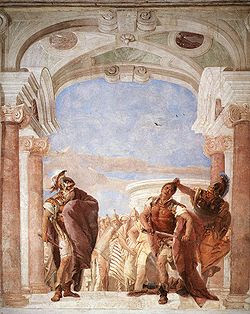 THE RAGE OF ACHILLES

The first two lines of the Iliad read:

Sing Goddess of the rage, of Peleus' son Achilles
the accursed rage that brought pain to thousands of the Achaeans.

Achilles is the only mortal to experience consuming rage (menis). His anger is at some times wavering, but at other times he cannot be cooled. The humanization of Achilles by the events of the war is an important theme of the narrative. (courtesy Wikipedia)

In writing fiction it's helpful to be able to impose the persona of a real person onto your character (or a composite of real characters) in order to help 'fix' them in your mind so that when you write character descriptions and action details (body language, interaction between characters etc) you have a more realistic perspective. Most of my characters in Shadow of the Lion have been 'tagged' in this way by real people I've seen or met or visualize as my characters (such as certain movie actors who would play their roles should the book be made into a movie)

I've spent lots of time while in Greece, for instance, taking down notes of people I've observed who are similar to my characters. Once I spent a lot of time and visits to the post office in Asprovalta observing a man who was identical to my character of General Perdikkas. And when I saw the tall, handsome Middle-eastern man walk into the Latin Quarter one night, I knew instantly he was my "Nabarzanes" the Persian, a fictional character in the novel. Sure enough, he wasn't Persian but from Iraq (a "Sumerian" he says) but most importantly he was actually from Baghdad which is the modern location near ancient Babylon. So, "the Babylonian" and I because good friends and my character came alive.

Lately I've been writing some violent scenes and having to dispose of some of the characters who I've grown very attached too. Whether they were particularly lovable or not doesn't matter when you have been following them around for years and writing their lives. So when the moment comes when you have to kill them off, it's a really tough call. But I found a solution of sorts. Put someone's face on them who you have had a bad experience with, then start chucking the stones or flashing the knife. You'll be able to do it with relish, trust me!

A couple of examples here: This past week there's been a serious run-in with a person who has sent extremely rude, insulting messages to me and my friends. This person has been acting the bitch for quite some time now and though we've tried mostly to ignore it, this last barrage of sheer vitriol and poison was more than we could take. Without responding in kind and lowering myself to this obviously bitter, nasty person's level, when it came to the latest "execution" that I'd been avoiding for awhile, I found it much easier to do the deed when I transposed that harpy's face onto that of my character (who, by the way, though she was also an imperious bitch had a great deal more class and grandeur and was in fact quite likeable. A tough cookie!).

I previously used the same tactics when I had to violently kill of a rather likable Athenian senator. At the time I was writing about him I met a Greek man who resembled the character exactly as I'd described him and in fact was also from Athens. I dated this guy a few times and thought he was nice, and then he showed his true colors -- a real jerk, what we'd call in Greece a "kamaki" who ended up treating me disrespectfully and rudely. How to get my revenge? Pretend it was him in the senator's place when I had to commit the murder. It worked. And I might add, it's a good way to get rid of your anger without hurting anyone or causing a scene. In both cases I was able to walk away knowing that these hurtful, mean characters no longer exist in my space and at the same put my characters to rest. I don't know if anyone else has tried this tactic. But it works!

THE TRIUMPH OF ACHILLES
Posted by Wynn Bexton at 7:00 PM

Very interesting posting, Wynn! Sorry about the stress from that obnoxious person. Sounds like you've good a really good idea there of channeling feelings about real people into the way we deal with our characters!

I think our approaches are not entirely as different as they seem. I also use the real world around me, including real people, for inspiration. One of my rules of thumb is "look to the world around you for inspiration, look inward for the story only you can tell". I just start out differently, with an abstract sense of the characters in story terms, then I work outward from there.

Like you, I also use bits and pieces of the people I see around me, I just don't base a character on one person outright, although that doesn't stop me from "borrowing" a sense of a person for a moment while contemplating a specific scene or event. But that is only for inspiration -- ultimately, for me, it becomes a starting point to fire up my imagination. I only write fictional characters, not real people (there we may differ, in the degree to which we hold onto those images or senses of real people when writing our characters).

Perhaps the main difference is just that we come at it from different directions, but ultimately we both end up with similar results and experiences and at times even similar techniques. Your posting has inspired me to look for more ways to draw from the world around me for that inspiration I need.

Adrian for some reason I didn't find your post until I check into my deleted mail. I don't know why it went directly there. I appreciate your comments. And I've missed hearing from a lot of blog friends so I wonder if it's the problem with the coding???

I don't know! But I'm glad you got it. I wrote two postings at the same time. I deleted one of them and tried to repost it to fix a typo, but couldn't repost it, so I just rewrote it. But I only deleted one, not two. I could not see the verification letters for many times over the past months, but now they appear for me so I can post. Whatever it is, Blogger does have a few bugs, from time to time. At least we can read your blog!