WHERE IS THE MUSE? 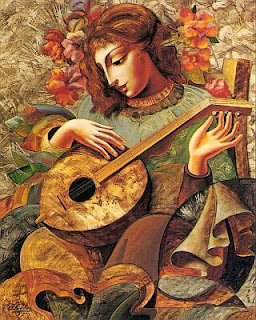 
My Muse comes after midnight


stumble across the dark room,


Where has she been in the daylight?


How many hours did I wait for her


listening for her voice?


“Was it your voice I heard


while I daydreamed in the sun?


Or was it only the sound of


of sheep bells on the mountain?”


If I wait til morning


the words she whispers to me


Written while living in a shepherd’s cottage , Lala, Euboeia, Greece.
I seem to be having a problem connecting with the Muse these days.
Very frustrating, when there is so much work to do. But I have felt unsatisfied with what I've already written for "Dragons in the Sky" other than those very early chapters written in the beginning. So I am trying to conjure the Muse's help.
Meanwhile I'm reading a very good book "Song for Achilles" that seems to be inspiring me. It's written first person narrative and in a very lyrical style, like Dragons. So perhaps I can capture the cadence again and smooth out what I've written which, to me, seems a bit stilted and phony — "made up" instead of flowing in a natural narrative.
I've also go to sort out all the research notes I took which are not in any particular order and slow me down when I'm looking for things. And, I need to learn more about the herbs and spells and magic things so I can add more of those ingredients to my story.
So, I call on you Muse, to please come and inspire me! I'm waiting....

Posted by Wynn Bexton at 9:14 PM No comments:

THE IMPORTANCE OF RESEARCH 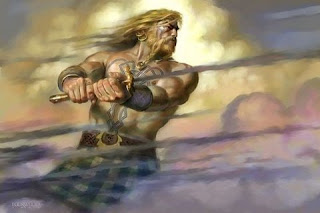 Writing historical fiction can mean that a lot of time is spent doing research.  I try to limit this time for myself (because I love researching!) by making sure exactly what I want and need to find out.
There's lots of info available on-line now but it is still a good idea to visit  your library and find some of the books written on the subjects you want to know about.

Not everyone has been as lucky as I have in actually being able to visit some of the places that I am writing about. Even though some are now just archaeological ruins, you can still get the idea of the way things might have been, along with visits to the local museums and all the book research you've done. Certain things can't be 'fictionalized' and you need to be as correct as possible when describing habits, customs and locations of the places in your novels. 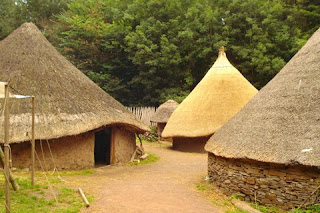 For my novel "Dragons in the Sky" I really lucked out when I discovered the Iron Age Celtic village at St. Fagan's Heritage Park near Cardiff Wales. Not only did I see first-hand what the houses were like people lived in back in the days I was writing about, but you could go inside the houses as well. There were people in period costume demonstrating what went on inside the houses as well as some of the materials and possessions Iron Age people would have. 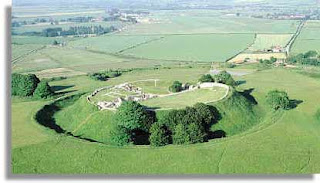 I also visited the site where my story first takes place, Old Sarum on the Salisbury Plain in the south of England, and the remains of the hill fort which gave me some idea of what the terrain was like where my fictional village of Caer Gwyn was located. 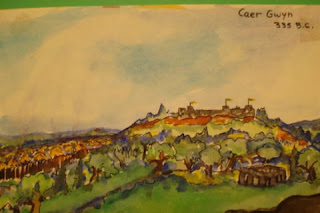 But there were still lots of details I needed to know about the life of the Brythonic Celts.  So I went back to the books and spent a couple of weeks jotting down bits of trivia (eating and drinking habits, warriors customs such as the chopping off of enemy's heads and keeping them for trophies. And I had to learn as much as I could about the healing arts, potions and spells so I could add these details to the story. Now I must go back over what I previously had written and add these little tidbits of information which is going to make Olwen's story even more realistic and visual.

Although I am writing a strictly fiction account of this young Celtic priestess's abduction and journey across Europe to Macedonia, I still have to get certain facts straight. I have learned the names of all the tribes and some interesting facts about them. I figured out travel times (by horse) and was able to scope some of the terrain on the google maps. It's been an interesting journey so far. And I want to make it as realistic as possible so that the people come alive and are believable.

It bothers me sometimes when historical fiction writers just second-guess at details and don't take time to make sure that what they have written is logical or truthful. Yes, it is 'fiction', but if you are including historical facts, those details must be correct. As for your interpretation of the characters you have a lot of leeway and, as the saying goes "The historical fiction writer can take as many liberties as they wish in making it a better story".  When I wrote "Shadow of the Lion", I was writing from a historically recorded plot-line so much of the novel had to be correct. Luckily I had some Classical Scholar friends in Greece who helped me with some small details like the way sacrifices and offerings were made etc, what they wore, what they ate. And I was able to interpret my characters according to what research I had done about them. I was also fortunate to be able to visit many of the locations in my story, to study flora and fauna and the lay of the land. It helped me describe things in a very realistic way so that the reader can imagine being there.

"Dragons in the Sky" is not written from a historical plot-line but at some point in the story when Olwen meets Alexander, there are certain events that must be recorded accurately. I can fictionalize her view-point of these events, but historians would have objections if I had things happening with Alexander that were not possible. So I have returned to my big box of research notes that I have kept from "Shadow", and this has really been helpful to me in plotting out the next part of "Dragons."

Remember, when you write historical fiction, you must do the work. Otherwise you are bound to have readers who throw the book down saying 'this is all nonsense'. Make your fiction as realistic as you can get it, make the characters live and breath, laugh and cry. That's what makes a great story!