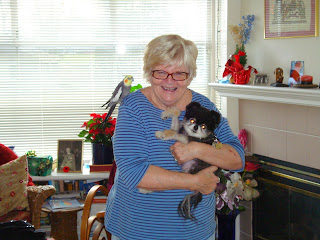 THE PET SITTER
Well, I think I over-shot my mark a bit when I declared that I'd have my novel finished by the end of December. One thing after another has come up to create diversions so there were several days I was unable to write at all and therefore fell far behind my goal and schedule. First, I was doggie-sitting for my friend's cute little toy Pom, Niki, who'd had a leg operation so was a bit of an invalid and took a great deal more care than usual. Cheeky bird tried to help by keeping doggie company (not that doggie was amused!) Meanwhile I also had to sort out files as I got a new filing cabinet, empty boxes of papers and stuff from my storage closet just in case Santa brings the new shelves I asked him for, and had a couple of appointments and pre-Christmas events to attend. 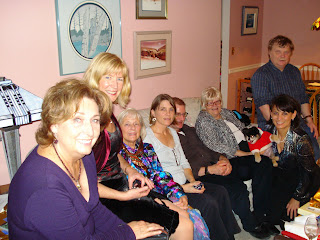 MY WRITER'S GROUP, 'THE SCRIBBLERS'
One event was a Christmas party for my Brock House people and then there was the annual Christmas party for Scribblers that includes writing an anonymous story which we all guess who the author was. We also exchange gifts anonymously too. Always a lot of fun and great food for the pot-luck!

This week there were two more pre-Christmas events. My grad class ladies were invited to a very elegant lunch at the home of one of our group and that same evening I attended a Greek dinner with another group of writer women who only meet at Christmastime. 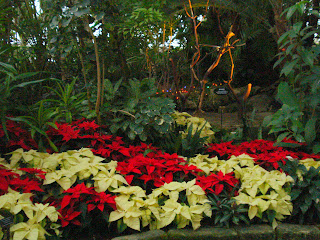 Somewhere in between, I made a little field trip to the Bloedel Conservatory Tropical Gardens one afternoon because it was free. Enjoyed an hour or so walking around under the humid dome, looking at the floral displays, tropical plants and beautiful tropical birds that fly about in there including some amazing parrots who greet you and call out to one another. I was doing a little piece for the Planet Eye website to go along with some other Christmas events I have been posting there as Vancouver Expert. This doesn't take up too much of my writing time and it pays well. Except now we have been told that due to the financial crunch from January we are being cut back and will have to make it up according to how many hits our stories gets. So please, folks, try and read my articles once in awhile as it will help the Poor Writer's Survival Fund.( www.planeteye.com )
At the same time, fortunately, I was offered two new 'jobs' with the school board instructing children's writing programs on Saturday mornings. This is a real bonus and I'm pretty excited about it. They are children from 7 - 12 and I've done a bit of work with these age groups before when I was in the Off the Page program for the Federation of B.C. Writers. So it will really expand my writer's resume. And the fact that I was told I 'came highly recommended' is truly a nice pat on the back. We all need our writer's egos boosted now and then.
Well, as for the novel, now that my place is decorated, most of the Christmas shopping done and pre-Christmas parties over, I am back at work on Shadow of the Lion. I realize I may not reach my goal to finish it to THE END by December 31, but I will at least finish Part VI and get a start on the last part some of which is already written. The bottle of champagne is still chilling in the fridge and the wrap party is all planned.
I'm also very anxious to finish because when I was sorting out boxes I found the unfinished manuscript of my Celtic tale and I'm dying to return to it. As well, I think the time has come to write up the Life Below the Acropolis memoirs. That day when I went through my boxes, I found the old manuscript of a mystery novel I had been paid to write from a badly written but intriguing 80 page plot outline, way back in 1984 when I lived in Greece. The guy took the copy I had given him to check over, (first draft) and wouldn't return it. I told him it was only first draft and needed lots of work. He went and sent it to a publisher, and it was rejected of course. Little did he realize I had the carbon copy of it. So the other day I was researching Christmas in Greece and found an article by this guy (he writes like he is writing off brochures). I decided to google him, and guess what came up? The title of the book that I had written for him which he has published in 2000. I am not sure if he has plagiarized any of my original work, but I have ordered the book from Amazon and intend to go through it and see. Likely he's changed it a bit, maybe even got someone else to write it for him. So that was a surprising and rather bizarre discovery adding to the excitement of the holiday season.
Oh yes, more writer's news. I recently had coffee with an actor friend of mine who asked about my Sappho play and requested the script to read over. He's the second actor friend who made this request (I haven't heard back from the first one yet). Anyway, House of the Muses is out there being critiqued. I know I have to do some major rewrites on it, but I still think it's a brilliant idea. So I will wait with bated breath to hear what the actors have to say.
Looks like my work is cut out for me in 2009. Another reason to finish off the novel as quickly as I can so I can get on with the new projects.
I hope you're all enjoying the holiday season. We are snowed in here at the moment, but that's okay. I'm dreamin' of a white Christmas!