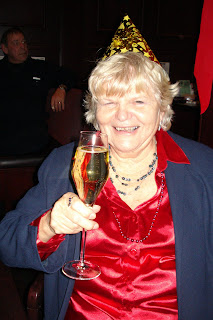 HAPPY NEW YEAR!
2009! Imagine that. How quickly the time goes. And this past week it flew by fairly fast because I was trying to meet a deadline. I had first set a goal to completely finish my novel by December 31, 2008, however due to seasonal distractions and various other reasons, I realized this was biting off a bit too much, so I contented myself to at least finish Part VI by that date. It was tough, but I made it -- more or less. I have spent most of the last week indoors at my computer. The weather co-operated by being terrible -- snow, snow and more snow and then some rain and then more snow! So it was a good incentive to stay put and get the writing done. I've tallied up quite a few hours over the last week and managed to at least complete a first draft of that Interlude part of the novel.

To explain the "Interlude" -- or 'Epitasas' which I use at the end of each Part (or Act) of the novel. This is the part of a play (Greek drama) developing the main action and leading to the catastrophe. In Greek, the word means "increased intensity". So at the end of each Part of Shadow of the Lion I have an "interlude"
taking place in a different location than the main setting of the chapter. In this case, the Interlude takes place in Alexandria, Egypt and in Ephesus, Asia Minor.
So, although I haven't been able to join my friends who have gone to warmer climates during the holidays, I have taken myself off on a trip to those other exotic places. 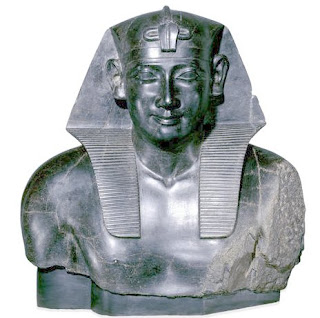 Ptolemy Soter was the alleged illegitimate half-brother of Alexander the Great who chose to return to Egypt and establish the city of Alexandria according to Alexander's plans. He plays an important role in my novel although he isn't always directly involved in the action. I have made him a sympathetic character although I know some historians claim he was self-serving and in his diaries, written later in his life, made himself out to be more heroic than he actually was. I have my own opinions of Ptolemy and his character from the research I've done, and he's one of the generals in this story who I have grown quite fond of. Unfortunately, due to the fact he was a kinsman by marriage of the antagonist Kassandros, he ends up siding with Kassandros in two of the wars of the Successors. But, he'll come through in the end. 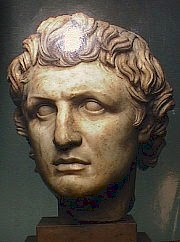 SELEUKOS
Seleukos is another of Alexander's important generals and long-time Companion.
He took over the satrapy of Babylonia after Alexander's death. Unfortunately, when the war between the Successors broke out, he was forced to flee into exile and went to Ptolemy for assistance. This is the part I am writing now. These events are happening while Roxana and little Iskander have been sent into a sort of 'house arrest' at the citadel of Amphipolis.

The problem with this section of the story was the complicated political sub-plots that were going on. So once I wrote the first draft, I had to go back and do several hours of research just to sort things out -- what was happening at that point in time and what's coming up for the final part of the novel. Thank god for the internet as I was able to find pretty well all the facts I needed -- getting dates straight and locations of the key players.

So today I stayed in all day long either researching or editing what I'd written yesterday. I still have a bit more editing and rewriting to do, but the Interlude is pretty nearly finished in a satisfactory form. And next week I will be starting the final part of the story. Another deadline looming!

Love the story ideas - one thread does seem to lead to another, and the whole thing makes a fascinating tapestry of events that is devilishly hard to unravel and write about in a linear fashion!

I hope you finish soon!!

Thanks Sam. For some odd reason the comments are not being forwarded to my email so I have to keep checking to see if there are any. I have now posted on my wall the outline for the grand finale. So I'll be starting on that this coming week. You're right, it is a 'tapestry' that's the only way I can describe this novel. I'm weaving it thread by thread to make the whole picture and sometimes it's so easy to get those threads all in a tangle!

Can't wait until you finish the novel and we can all finally read it. It sounds really interesting and I get the feeling it will give me new insight into certain historical figures.