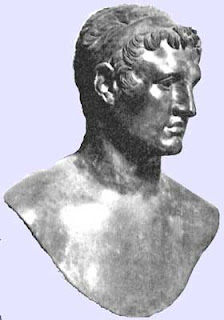 Ptolemy﻿ Soter
Prologue: Babylon, the 28th day of Daesius (June) 323 BC
Ptolemy, companion and illegitimate half-brother of Alexander the Great writes in his journal:


'Today, the 28th of Daesius ,an ominous darkness has descended over city. Alexander is dead. When I looked at him, he seemed to be at peace at last.  There was, in his eyes, a look of calm acceptance.  I have wept for him. He was a god and man. He will continue to live, I think, forever and ever, for thousands and thousands years.’
Ptolemy wrote memoirs on Alexander's campaigns.  He was one of Alexander's most faithful companions and friend,  allegedly an illegitimate half brother of Alexander.  He could have tried to take over the army after Alexander died, but he chose instead to go to Egypt and establish the city of Alexandria as Alexander had wished.  He became the first Ptolemaic Pharaoh of Egypt and his dynasty lasted for many years. (The Cleopatra that we know in the histories was from his lineage.  'Cleopatra' was in fact a Macedonian royal name.)  In "Shadow of the Lion"  he is the royal blue thread in the tapestry,  telling Alexander's story in the prologue and epilogue and appearing throughout the novel.  Although some historians saw him as self-aggrandizing,  from what I have read and researched, I saw him as an honest, loyal and honourable man.  He is one of the sympathetic characters in the novel, and the 'uncle' who Iskander (Alexander's son) sees as a savior.
It has been a long, long journey for me writing this novel.  Many stops, starts, several hiatuses when I was working on other writing (plays, memoirs and travel writing.  Even some poetry related to the story, my collection of 12 Homeric Hymns "Hymns to Gods and Heroes").  But now, at last, my journey has ended.  The telling of the tale, for sure, but there's still work for the 'editor' to do: polishing, tweaking, cutting, looking for an agent/publisher.  Still, when I wrote the end this week I felt a great sense of accomplishment.  And I have a lot of people to thank for their encouragement and assistance.  There will be a page of acknowledgements in the front of the book when it's published.
The journey started in Babylon for my characters, taking them through the Middle East, Egypt, and finally north to Macedonia.  It was a journey of almost 13 years.  Mine took longer than that, including a year and more of research before I began;  an attempt to write it as a juvenile historical which I abandoned after a year when I realized the story was too political and complex. I spent a lot of time in Greece doing research, with the help of Classical scholars, the Greek Ministry of Culture, the secretary of the Society of Macedonian Studies and many friends there and here. There were a lot of halts on the journey, conflicts, problems,  joyous times and sad times.  But now, it's done.  Do I feel relief?  Am I sad?  Well, I have had the ending written right from the beginning, so I already knew how it would end, so it wasn't quite as much of a shock to me as it might have been had it been really 'fresh' writing.  I think when I wrote the end of the epilogue I felt the impact.  But it probably won't be for a few days yet that the full realization comes over me.  It's done!  It will be strange to not be thinking about it 24/7, jotting notes down in my notebook, getting up in the night to record lines of dialogue or setting detail that I suddenly thought of.  I have been living with these characters for a long, long time.  They are real people in my mind,  just as most of them were real people in history.  So, yes, I will miss them.
Epilogue: Alexandria, the 28th day of Daesius (June) 310 BC
Ptolemy has received word from Amphipolis, Macedon, and writes this in his journal:
'And now Alexander’s dynasty has ended. Such is life, the way of men -- that in the twinkling of an eye an Empire can collapse. We are driven by greed to win fame and power in unrighteous ways and the more we have, the more we covet, until greed and blind ambition destroys us.’ 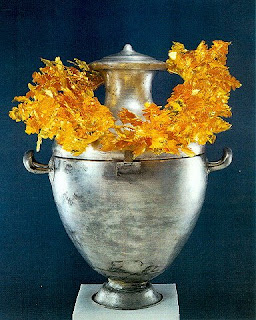 Funeral urn containing the remains of a Macedonian Prince(When I asked the archaeologist at Vergina, the Royal Tombs, if they might be those of Alexander IV, he said they believed so, because he (my Iskander) was the only royal boy of that age, about 14, who had died at that time.)

I am so happy for you to have reached this stage. It is a heady moment even when you still have revisions to do.
Congratulations!

Congratulations, Wynn! I'm amazed at all the work you put into this novel, and how wonderful that you were able to combine research with travel to help you develop a truly authentic feel for the story. Ditto what Julie said: I'm so happy for you! A truly awesome job.

Thanks Adrian, it's been a long journey and still more work to do with final edits, but the story has been told. Now for the next phase!

Thanks Meghan, It seems forever we've been cheering each other on. I hope you are making good progress with your novel too!

Well done Ruth. I'm sure your journey felt almost as long as Alexander's! Looking forward to seeing the printed version.

You're right Peter, my journey writing the book took about as long as Alexander's did. Quite a relief to get it finished!