SOME INSPIRATION FROM THE MUSE 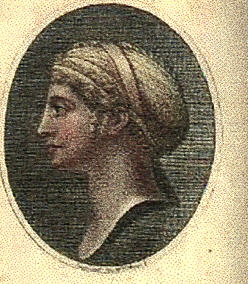 SAPPHO
This week I had some unexpected encouragement about one of my works-in-progress that has been shelved for the last couple of years:  my play about Sappho, the lyric poet,  titled "House of the Muses".﻿
I had begun writing this play after being encouraged to do so by an artistic director/actress I know and before I began I got a membership in the Playwright's Centre so that I could qualify for some workshops.  I even made a special trip that year when I was in Greece, to visit Myteline (Lesbos) and to go to the town where Sappho once lived (Eressos).  I did tons of research before I was prepared to begin writing.
This was another period when I basically stalled work on my novel, "Shadow of the Lion",  at least I was working a bit on both, putting most of my energy at that time into the play.  I got the first act written and was prepared to begin the second act when the whole thing kind of caved in.  The people in the workshop, and mainly the director of it, simply didn't get what I was writing, perhaps because I was styling it like the Greek dramas (because, after all, Sappho's story is a tragedy).  A couple of the workshop members made a few critiquing suggestions but basically the director dissed it and told me that the way it was it was unproducable.  He did not offer any suggestions as to how I could fix or improve it.  I was crushed, after all the months I had put into it, so I decided to shelve it and focus entirely on the novel.
Here's a brief explanation of what the play is about:
The story of Sappho is a classic story of betrayal and unrequited love.  Sappho has been misunderstood in modern times. She was not simply a lesbian who wrote love poems to some of her girls. She was a widow, a mother, a woman with male lovers, and most importantly, she was a political activist and a musical super-star of her time. At her House of the Muses private girls school on the island of Lesbos, Greece, she taught the young daughters of wealthy Asians and Greeks the art of music and poetry. Music seems to have been the natural mode of expression and the intimacy of the group was such that there was no secret that could not be shared, no subject that could not be sung. Soon these girls would marry, and it was to this end that their accomplishments were acquired.

In Sappho’s house they learned that virginity kept was glorious, while virginity lost in a wedding bed was an even more splendid thing. One had to be both pure and desirable and the balance was not easy to keep for chastity was provocative. The need to marry well was what brought the members of the Sapphic group together, but marriage also made them move apart again and once they left they could never come back again, could never be girls again. Their change of status (marriage) was as total and as irreversible as the loss of virginity.


So it was with Sappho, when she was sent into exile far from the House of the Muses. Her life was never to be the same again, and when she returned she found her world turned upside down, her school in chaos, her land taken by the tyrants, her most beloved friend gone. Because of her political stance against the tyrants and her love of the girls in her school, she was accused of disorderly conduct and being a ‘woman-lover’. She was slandered and defiled, and most of her poetry was destroyed. In end, betrayed by her young male lover and deserted by her goddess, Aphrodite she committed suicide.


Sappho’s tragic story is a classic story of unrequited love. Her quest for love, acceptance and lasting friendship is what we all seek. With Sappho died some of the world’s most profound and beautiful poetry.

I haven't looked at the script since that time I shelved it until a week after I returned from my holidays in September and was asked to be guest poet at a Sunday poetry reading, Poetic Justice.  At that reading I read the opening monologue by Sappho.  It was greeted with enthusiasm and one of the women in the audience who is an actress expressed that she would love to perform it.  That gave me renewed interest in the project.  Maybe it wasn't as bad as I had been led to believe!

Then the other day  I happened to be in a conversation with another woman, also an actress, who was bemoaning that she hadn't landed any roles lately and considered quitting acting.  It suddenly struck me that this woman would be perfect to play the role of Sappho.  So I asked her if she'd like to read the script.

I got a phone message from her a couple of days ago and she was very enthusiastic about what she had read so far from the script.  She said that she was 'right there' and really related to all the action etc. She asked if she could do some editing on the dialogues for me (which was just what I felt the script needed). So I am now waiting to hear her opinion about it once she's finished reading Act One.  If she thinks it's worth pursuing then when I am finished Shadow I should go back and finish Act Two.  It would be exciting even if I only got a reading done of it.  I had put so much energy into the play it seems a shame for it to be tucked away in a manuscript box never to see the light of day or hear some talented women reading the lines I have written. (I used as many of Sappho's own words in the script as I could, too!)

So, you just never know.  Sometimes the work you think is worthless turns out to be alright. You just have to give it time.  And put it into the right hands.

Ruth, this sounds marvelous. Sappho has always fascinated me. That artistic director didn't know what he was talking about. Hope the play blooms! d:)

Thanks Debra, this morning I had a phone conference with the actress who is doing some dramaturge work on the script. She loves it and has given me some excellent advice on tweaking the dialogues etc. She hasn't finished reading it yet but is really excited about it so that is SO encouraging!