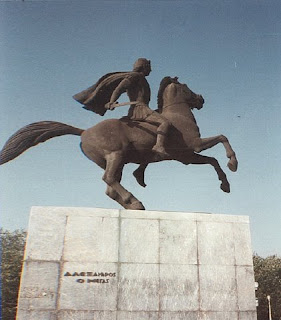 Alexander the Great on his horse Bucephalus
﻿
One of the things I always remind writers in my novel writing classes is that part of the job of the writer is also to do the research.  And if you are writing historical fiction this is no small task!  Even if you are writing fiction of any kind, make sure you know your subject and have a keen interest in it or you will soon became overwhelmed with the research that is necessary to make your characters realistic and your settings as accurate as possible.  This is even true with 'modern' settings.  For instance, if  you are writing about someone who is a nurse or a lawyer,  make sure you know what it entails to be in that profession.  Interview people who are, or read up on it.  If you are writing about a bag lady or a drug addict, you don't need to go out and sleep on the street or shoot up heroin but you must study and observe what it is to be like those individuals and perhaps chat with a few to find out.  (For instance, my play "The Street" was a cautionary tale about heroin addiction written after my boyfriend and his friends became hooked on the drug unwittingly back in the 1950's before any of us knew the dangers.  I personally saw what happened to these people when they became unfortunate addicts and as the play was set in the East End of Vancouver I knew the setting and period of time very well.)

Writing historical fiction though, is a much more daunting project.  Again, you really need to be passionately interested in the subject you intend to write about, read everything you can about that period (including other novels), and be prepared for lots of unending work.  I was introduced to Alexander the Great when I was still in high school and spent a good deal of my last year of school researching and writing an Alexander themed novel. (Nearly failed because of it!).  There were no computers, videos, movies (other than that horrible one made during the 1950's starring Richard Burton where even the sets were phony) so I relied on library books.  Nowadays you can research on-line as well as at libraries and the sources are endless.  However, to get a real feeling of the locations, wherever possible, it's a good idea to go and visit.  Of course, when I started to write about Alexander I relied only on book research however when I eventually visited Greece many years later I was astounded to see how accurate some of my descriptions had been of locations.  For my current novel, "Shadow of the Lion", I was not only able to research in libraries and on-line, but I have some very valuable contacts who are Classical Scholars and was able to visit most of the locations in northern Greece (Macedonia) and some in Turkey.  Of course, getting to Iraq was impossible (and the first part of my novel takes place in ancient Babylon) but I at least was able to view videos and get a pretty clear idea of what it might have been like. 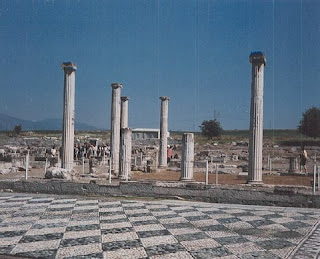 Pella, the royal city where Alexander was born.
In researching my novel I have visited as many of the sites where Alexander lived that I was able to.  I got a real feeling of 'place' by doing this.  Of course a vivid imagination is also a valuable asset, however I always try to be fairly accurate in descriptions so I can get across the sense of 'being there'.
So it was a thrill to visit Pella several times. (The site of the palace is still being excavated but I was at least able to get an idea of the layout of the city and imagine it.)  I have also visited Dodoni, where Alexander's mother lived in the mountains of Epiros, the island of Samothraki where she met her husband Philip, King of Macedon and Alexander's father, and the town of Pydna where part of my story takes place where the royal family (Olympias, and Alexander's Soghdian widow and son were staying while the city was under siege).  I have also been twice to Amphipolis, an important site for the last part of my novel.  Someone said that Classical Greece is dead.  But it isn't.  Certainly there are a lot of things that are no longer there and sometimes the landscape has been altered, but when you walk among the ruins and see the lay of the land you can visualize it as clearly as it once existed.
If you are writing a more current story,  set in New York city, for instance, and you've never been there (especially if you're from a small town) you should treat youself for a visit, as New York city is an experience like no other and to capture the essence of it is part of the exciting detail you'll want to add to your story. 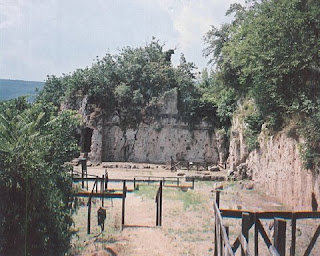 Mieza, the school Philip built where Aristotle taught Alexander and his Companions.
But getting the settings right is only half the battle.﻿ There's all those other details too,  like what did people eat back then?  What did they wear?  What was their mode of transportation?  How long did it take to get from point A to point B on horseback?  It's never-ending.  I seem to be always stopping to check some tiny detail.  As someone once told me,  "If you have them eating potatoes in the first chapter and potatoes didn't exist at that time, it will shoot down your credibility."  My Classical scholar friends have made sure even things like the way sacrifices were made was accurately portrayed.  And all that meticulous detail is what often makes historical fiction take so long to write.
Some tips for doing research are necessary.  I learned a long time ago to make a list of what I needed to know at that moment and only research those subjects.  It happens I love doing research and can spend far too many hours browsing books or surfing the net.  So I usually only look things up as I need to know them and keep a file with notes, photos or whatever I need to keep on hand.  Then, when you are doing the writing, use only what you actually need.  Don't bog your story down with too many details no matter how fascinating they are.  Just ask yourself, "is this necessary for the plot?"  If it isn't, don't use it.  (Sometimes, a book can be so full of meticulous research details that it becomes boring.)  Remember, you're not writing a history text, you're writing a story. So you want to keep it interesting as well as informative.
﻿
Posted by Wynn Bexton at 1:59 PM

excellent post! I also really enjoy your photos. Have you thought of including photos in an appendix at the end of your novel? I'm sure readers would enjoy reading about your writing journey in creating the novel, and your visits to the historical sites. Perhaps that could even be a separate book!

Thanks for your encouragement, Adrian. I really appreciate it. I am down to the finale now, just trying to fit it in with all the christmas events but I am determined to finish before the end of 2010.