HERE'S WHAT I'M WORKING ON NOW: A CELTIC TALE 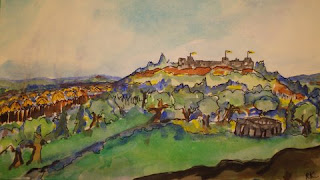 Caer Gwyn
DRAGONS IN THE SKY
By
Wynn Bexton
(W. Ruth Kozak)
Was it the sound of the wind or the bird song
from the meadow that brought Olwen’s voice
to me that day, as I sat on the edge of
the earth mound at Old Sarum
on the Salisbury Plain, in England? I looked through
her eyes, and saw life as it was then.
She spoke through me, telling her story.
Wynn Bexton
PART ONE
“CHILD OF THE RAVEN”
The Druids believed that when we die
Our souls return again, in another form...
Stanza One:
The Song Of Olwen
I am the Druid.
The Druids teach of the stars, the world
and the nature of the gods.
The Druids are the Spokesmen of the gods.
The Goddess speaks and says:
Olwen is the fairest among flowers,
daughter of the hawthorn,
Child of the Raven,
The Druid’s child.

Listen to my song: I am an honoured child.
I am Olwen, daughter of the Earth Mother,
Child of the Raven
My voice is the bird’s song: my music is the wind’s harp.
I will be the pine cone
clinging to the branch.
The wind will not dislodge me. 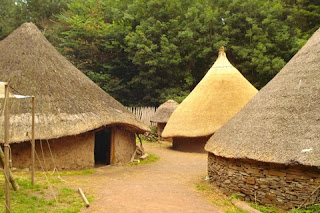 An Iron Age settlement like the one Olwen lived in
(this is at St. Fagan's Heritage Park, Cardiff, Wales)
Stanza Two: Song for Caer Gwyn


On the southern plain of Albion, where the borders of our tribe enclose the Great Stone Circle, the hill fort of Caer Gwyn guards the passages of the Chalk Trail. In this day only a mound of earth rises out of the grassy fields like an inverted bowl, but when I was a child there were greenwoods and beech groves where I collected roots and herbs, and an oak grove where the Druids worshipped at a secret shrine. The Druids are the Oak Seers and they know all the Mysteries.
Our village was enclosed within a circular palisade of staves.  It was a small village with wattled huts, like rounded straw stacks with low roof thatches.  Inside the stockade an outer circle of stables and cattle sheds ringed the craftsmen’s huts; then the houses of the freemen, and in the centre of the whorl, like the hub of a wheel, stood the timbered lodge of my grandfather, the elder priest.
Outside the palisade, the fields were bright with wild flowers and our cattle grazed in the lush green pastures along the muddy river bank.  Our yeomen herded cattle and raised small crops of barley and wheat, protected by the warriors of the King’s Royal War Band who kept our borders safe from the raiders of rival tribes.
Those days Caer Gwyn’s timbered Hall rang with the bard’s songs and in the hidden grove the Oak Seers prophesied Fortune, War and Death.  Now the Council Hall and the King’s lodges have decayed into earth.  The mound is bare except for small shrubs and wild grasses.  The oak grove that once held the mysteries of the gods has been burned and ploughed into the soil.
Here, in the stillness of the summer afternoon, with the sun dappling the countryside a green-gold, and the air redolent with the scent of fallow earth and meadow grass, listen to the gods speak.
The God Speaks and says:
Who knows the secrets of the Oak grove?  The spirits of priests and kings are here.
Posted by Wynn Bexton at 4:32 PM