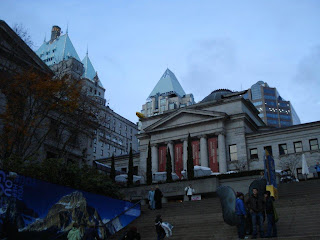 The Vancouver Art Gallery
My friend invited me to an opening night exhibit at the Vancouver Art Gallery.  The first exhibit we visited was LIGHTS OUT! Canadian Painting from the 1960’s.  This was mainly modernist paintings reflecting the political and cultural tumult of the times. Canadian painting during the sixties ranged from colourfield works and bold optical images to haunting figurative works.  Artists like Harold Town, Michael Snow, and Michael Morris to name a few are on display.
But what really captured my attention in that exhibit was an introduction by the curator mentioning some of the artists at the Vancouver Art School in the 1960.  Among the names was Reg Holmes, who was my art teacher back then when I was young (in my early 20’s) with a small son (Stevie) and struggling to adapt to a conventional life when I really wanted to be out in the world exploring, writing and experiencing all the exciting things that were going on.  I was still working occasionally for the Vancouver Sun and Province news libraries, at the end of the ‘50’s and in the early ‘60’s decided to pursue art as well as my writing.  Those days that I attended night classes at the Vancouver Art School were exciting and memorable.  Funny, but lately I’ve been thinking about if I should make time to pursue some painting again (I used to paint in oils and watercolours but haven’t for quite some time.) And the Reg Holme’s name popped up and I’ve been overwhelmed by nostalgic memories ever since.


http://www.vanartgallery.bc.ca/the_exhibitions/exhibit_lights_out.html
(this exhibit runs to April 29, 1012)


The main exhibit was the BEAT NATION: Art, Hip Hop and Aboriginal Culture.  Young aboriginal artists from across Canada have contributed to this show.  Some of it has been influenced by the hip hop culture and music which has transformed the art forms for these talented artists. The exhibit reflects the pop culture, graffiti with Haida figures, carved skateboards that look like intricate basket weaving and include the works of Sonny Assu, Jordan Bennett, Skeena Reece and Nicholas Galanin among others.
I was particularly intrigued by the film presentations that left my friend and I with a deep impression of the Aboriginal people in Canada, their rich culture and the years of struggle they have faced.  “Oh Canada, Our Home ON Native Land” was a thought we carried with us after we left the gallery.


http://www.vanartgallery.bc.ca/the_exhibitions/exhibit_beat_nation.html
(This exhibit runs to June 3, 2012)
Posted by Wynn Bexton at 5:28 PM