PROGRESS REPORT #19: THE BALANCE OF SHOW AND TELL

"Sing, goddess, the wrath of Peleus' son Achilles, a
destroying wrath which brought upon the Achaeans
myriad woes, and sent forth to Hades many
valiant souls of heroes."
Homer 700 BC The Iliad, Bk. 1 l 1 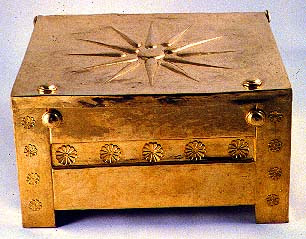 Gold casket containing the bones of King Philip
Royal Tombs, Aigai.
You know the Muse is back when she nudges you just as you are about to settle down for a long winter's nap, and you have to get up and write down the words she spoke to you. That happened to me last night just as I was ready to drift off. I know from past experience, don't ignore her. Because by morning you won't remember what she told you.

I'd been struggling with a few little transitional parts of this new chapter and til then couldn't figure out what I needed to say. But just those few lines helped me get right back into it and today I pretty well finished another chapter. (There's still a few patches which need work but I know that will come to me, so I must keep forging onward.)

The problem with this chapter was figuring out what to dramatize and what to have as narrative. There is a great deal going on, lots of action and intrigue, but as I already am way over the limit for pages in this novel I know I have to cut down somewhere. So it was a hefty decision trying to decide what parts should be actually 'shown' and what parts I could 'tell' in narrative. Hopefully I've found the right balance here. All through the chapter I have tried to keep an equal amount of both so that the story doesn't bog down, or get off on unnecessary tangents. I haven't workshopped it yet, and there may be a few changes to make later, but for now I'm feeling satisfied with what I have written. You'll see by this snippet, it just a small part of a larger scenario of murder and mayhem. 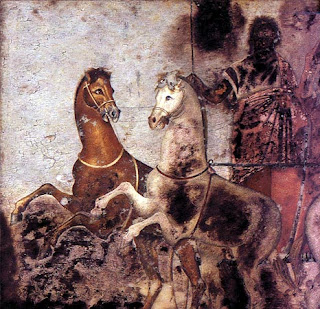 Charioteer, from a wall fresco, Royal Tombs.
Here's a bit of an intro to this section of the chapter. Alexander's mother, Olympias, who had been exiled from Pella, the royal city of Macedon, for over ten years, had now returned, bringing along with her Alexander's widow and son, the heir to the throne. There has been a coup, in which the wife of the other titular king, Philip Arridaios, tried to seize the throne. Olympias means to wreck vengeance on the usurpers which include Kassandros, son of the late Regent Antipater. Here's just a sample of what happens.

Olympias called a meeting of her commanders. Sitting in a gilded chair at the great table in the old council room, she gazed slowly from man to man. She deigned not to ask them for advice, nor accept any. She already knew what she must do.
She ordered the men to sit and then she delivered her orders.
“I know, like myself, that many of you have long time blood-feuds with the Antipatrids. I order you to rout out every one of their clan and slay them. Show no mercy, as Kassandros and Iollas, the sons of Antipater showed none for my son when they delivered to him the fatal potion. We must rid Macedon of these vermin. Once they are disposed of, we will be a united strength against our enemies.”
Someone whistled softly.
She scanned the room with narrowed eyes. “ I want them put to death. Every one of them!”
A gasp went round the room. Men shook their heads in disbelief and looked warily at one another. Her words, powerful as a curse, were like a death knell.
“Does the Regent know of this?” asked one of the grey-bearded elder generals.
“This is my edict. Yes, Polyperchon will agree.”
“But Madam...This clan is the noblest in Macedon,” he protested.
Kronos, her chief commander, cleared his throat and spoke up. “Madam, none of us question your authority, but do you think this is wise? Antipater was well loved by our people.”
Olympias stiffened and glared at him. He stared back boldly at her. “Should we not wait for Polyperchon to return?”
She fixed a malevolent look on him. “Are you with me or not, Kronos?”
Kronos clamped his mouth shut tight. “As you wish. Your orders will be carried out, Madam.”
“Do not question me, Sir,” Olympias said. “Swear by the stream of Acheron that you will obey my will and stay loyal to our cause.” She swept a dangerous look across
their stunned faces. “Or I will consider you all traitors!” Her face was set in a hard scowl, the lines between her brows etched deep. “This session is over. Go now, and do as I have commanded!”
No one dared contradict her. They all knew the power of her dark magic. The generals stared at her incredulously but none dared speak up again. Under her baleful eye they each agreed, though some reluctantly, and went out to follow her orders, not speaking to anyone.

The news spread quickly throughout Macedon that the titular king Philip Arridiaos had been removed from his wife’s control and was now under guard in the island prison, while his wife, Queen Eurydike was being hunted by Olympias’ men. There were rumours that Adeia-Eurydike had escaped to Euboeia to seek help and wait for Kassandros’ orders. Others claimed she had fled to the garrison at Amphilpolis and would muster a fleet and more troops there.
A reign of terror began across the country. Citizens cowered in their houses afraid to venture forth lest they be mistaken as the enemy and arrested. Search parties torched houses, incinerating dozens of innocents. Arrests went on for days. Anyone who was a kinsman of Antipater or a supporter of the renegade Queen was snatched off the streets or dragged from their homes.
The people of Pella recoiled in horror and panic gripped the city as Olympias’ henchmen went from house to house searching for anyone who might be a friend or relative of the Antipatrids clan. Hundreds fled from the city, making their way furtively by boat or foot southward to join Kassandros in Greece..
Olympias went herself to the necromanteion to watched gleefully as the grave steles of Antipater’s family members were toppled and smashed to bits. She, herself, saw to the defacement and destruction of the tomb of the old Regent’s youngest son, Iollas, who had been Alexander’s cup-bearer, and had served him the poisoned wine.
She pronounced with chilling venom, “Let nothing remain of the murderers! Erase every vestige of their existence.” Her words hung for a moment, then cleaved the air like the swipe of a sword.
After the desecration of the graves, she ordered her fiercest Molossian hill fighters to track down and kill Kassandros’ brother Nikanor who had been tracked to a garrison near the Thracian border where he had taken refuge.
“Show no mercy to him and those who have sheltered him,” she commanded.

All through the country, Olympias’ soldiers kicked down the doors of houses where innocent children played by the hearths and guileful women went about their chores. Taken unawares, the men folk tried to take flight but were cut down ruthlessly by the soldier’s blades and impaled on their spears. There was chaos in Pella and nearby towns, wherever kinfolk of Antipater resided as the queen’s henchmen raided, wrecking vengeance on guilty and innocent alike. Houses were torched, flocks and horses confiscated. Nothing must be left of the Antipatrid’s clan, the Epirote witch had decreed it. Anguished screams of men and neighing horses rent the air as those pursued scrambled to get away only to be caught in the drag-net of Olympias’ men. Dozens of victims were murdered, scores hauled off to prison to be tortured. Nobody dared stop her, lest they meet with reprisals. Her own men, aware of her power, were scared to death of her wrath. Even the toughest soldiers who were inured to killing shrank in horror at the Queen’s bloody rampage. Everyone dreaded her, felt the terror, and recoiled in dismay before the scale of the destruction she had wrought against the noblest clan of Macedon, the wealthy lords and relatives of their once beloved Regent Antipater.
Finally when all was done and they surveyed the scale of the carnage, a hundred victims had fallen to fire or the sword, murdered on the Queen’s orders, left unburied, exposed for the carrion birds to devour their flesh.
The people turned away from Olympias with horror. “Surely the queen is deranged!” they said. 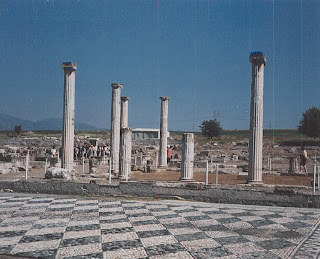 Pella
"There is nothing more dread and more shameless than a woman who plans
such deeds in her heart as the foul deed which she plotted when she contrived
her husband's murder.

In the extravagance of her evil she has brought shame both on herself and
on all women who will come after her, even on one who is virtuous."

Wow! I really got into it. I love that era and also that story, and you certainly brought that scene to life! You showed why this mattered so much to the generals, and that created tension between them and Olympias.

Good job, Wynn! That was a well-handled scene. d:)

Thanks so much for your encouraging comments. This was a tricky chapter to work out, as you can imagine. I still have to tinker around with a couple of parts in it but nothing serious. The main parts are pretty well taken care of. I appreciate any comments as you writers know what it's like working alone. (I could use a mentor about now!)

Olympia is such an interesting figure, and you do such a great job describing how she looks, but I'm wondering while she was giving the orders how she felt? Angry, sure. But any conflict of emotions? Fear? Worry? Just insane?

She is a fascinating creature. I am trying to balance her nastiness with a bit of tenderness which she shows toward her grandson but it's tricky as she was a pretty tough cookie.

That woman was deranged, lol!
Funny how we both show her as mad for power, ruthless, yet protective of her grandchildren.
Wasn't Kassandros her son-in-law? Didn't he marry one of Philip's daughters?

Hi Sam, yes it's true that Kassandros married one of Philip's daughters (part of his ploy to grab the Regency) Her name was Thessaloniki, and she is the only woman in this epic saga whose name still exists in the city he named for her. Philip had many wives (none of whom Olympias recognized except as rivals to get rid of) and therefore I doubt she'd have considered Kassandros her 'son-in-law'. Thessaloniki was Philip's daughter by one of his spear-bride wives. She plays a cameo role in my novel. A rather pathetic creature who is taken advantage of by this nasty man.

I really enjoyed reading this. Powerful and believable. Good luck with it all.