PROGRESS REPORT #16: WHAT DO YOU WISH FOR? 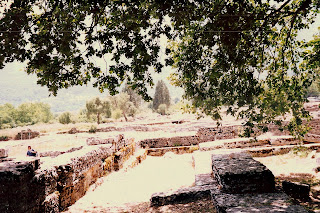 I've put ads on my blogs, testing the system out, but I didn't wish for this one to be so in-your-face. The one on my travel blog is a more unobtrusive size. Guess I'll have to make some changes. I did this because I am planning to start up my own travel web site in the new year and I was told to try the google ads for it. It's a way to make a little money too, as well as advertising for my own site. But I don't like the look of this one on this writer's site and will have to tone it down.

I've been writing about oracles and the consequences of people or powers who think they can take things into their control to get their own way. The most recent chapter of Shadow that I'm working is full of the grim results of this kind of behavior. We see lots of it in the world today, too. History does tend to repeat itself, as they say. 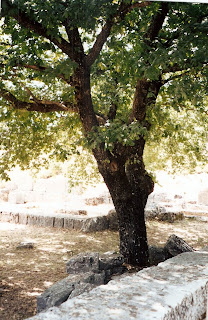 The oak tree that grows in the place where the ancient oak oracle grew.

I'm making fairly good progress on the novel although this past week was busy with all sorts of distractions as well as work. My classes are winding up; I did some book-keeping for a friend; I had my little visit with Patrick who is now in Chile and heading for Peru before he returns here in two weeks; there was also some respite from the more serious aspects of my writer's life on the weekend when I went dancing, spent an afternoon at the bistro listening to my son play Blues, and then attended the CD launch of a friend who sings jazz at the L.Q. on Wednesday nights. All great fun, but now it's time to buckle down and return to my more disciplined schedule of writing, exercise and diet. There comes a time when the party's over for awhile.


I intended to post this next little snipped of Shadow of the Lion at Hallowe'en but I didn't get time to fine-tune it. (I still haven't workshopped any of this so there may be changes later on.) It had a nice sort of Hallowe-enish flare to it, a prelude to the following chapters in which Olympias unleashes her wrath on her enemies.


In this little scene, which is in Iskander's point of view, she's taking him , (Alexander's son) to the sacred oak shrine in Dodona, to consult the oracle before the royal household returns to Pella. Olympias has been exiled from Pella for more than 10 years so just wait and see what happens when she makes her grand entrance back to Alexander's city.


Early the next morning, before anyone else was stirring, his grandmother came to wake him.

“It is time to visit the sacred oak shrine.”
She helped him bathe and dressed him in a white linen chiton then placed his gold diadem on his head.

“Your father went often to consult the oracle of the oak tree,” she said. “The oak tree grew from an acorn while Homer was still alive. It is the oldest oracle in Greece, older than time. Dione is worshipped there but it’s power comes from Zeus and the Egyptian Ammon, the greatest of all oracles. The god spoke here at Dodona even before Apollo came to Delphi.”

Olympias took him by the hand and led him out of the palace, past the guards who saluted them at the gates. The morning was fresh and still. From the hills came the melodic jangle of sheep bells as the shepherds led their flocks up the mountain slopes.

The sacred precinct was guarded by a low stone fence. Inside it, a majestic oak spread its huge ancient branches dwarfing the marble altars. Small votives were stuck in the fissures of it’s trunk, left by worshippers to the shrine.
The wind ruffled quietly through the high branches. The child heard the roo-coo-coo of the birds who were huddled there perched in pairs on the leafy branches.

“Those are the sacred black doves of Dodona,” Olympias said.

All around the sacred tree stood tripods holding hollow bronze cauldrons hung with bronze-tipped weighted leather cords that jangled in the breeze. The thrumming of weights against the cauldrons, the cooing of the birds, cast a hypnotizing spell in the precinct.

There was a little stone thatch-roofed hut nearby.

“Who lives there?” Iskander asked.

“That is the house of the black Doves, the servants of the oracle,” his grandmother explained. “They are the priestess of the shrine.”

The inhabitants, Three ragged old women dressed in black, came to the doorway. and shuffled out to greet them, on bare, shrivelled bird feet. They seemed surprised to see a child there. One grey-haired hag, wrinkled as an acorn husk, put out a bony hand to touch him.

“Alexander?” Her filmed and rheumy eyes peered hard at him.
“It’s Alexander’s son, Mother,” Olympias explained.
“Why have you come, Alexander?” the crone said in a creaky voice.
“To question the god,” the child replied exactly as his grandmother had rehearsed him.
“Zeus or Dione?” squeaked the crone.
“We wish to consul Zeus-Ammon,” Olympias said. “Give me the things on which to write our supplication.”

The tallest priestess, who was bent and gnarled as a wind-blown tree, leaned her head toward his grandmother and said, “In truth, only the god will see your question. I will set out the jars. One for the gods to be propitiated. The other containing your reply. Do you wish both?”

“We wish only a reply,” Olympias said.
“Then take care you address the god clearly,” warned the eldest priestess

On a low table under the tree, she placed a jar painted with images of the gods. Another crone handed Olympias a piece of lead and a stylus. His grandmother put the lead strip on the table and wrote out the words, whispering them to him:

“Olympias and Alexander ask Zeus Ammon of the sacred grove: Will our return to Macedon be propitious?” Then she dropped the piece of lead into the jar.
Iskander stood watching, his eyes fixed on the painted terra-cotta jar, thinking about what they had wished. The crones stood under the sacred oak tree with lifted arms, chanting the invocation in a unintelligible jargon, some mysterious tongue with cooing, chirruping sounds that mimicked the doves. Next to him he felt his grandmother’s presence, aware that she was trembling as she stood with indrawn breath.

A strong gust of wind hissed through the leafy branches clattering the lead cords against the caldrons. Startled, the doves suddenly took flight. Above the treetop the child heard harsh caws and screeches. He looked up and saw two ravens fighting. Fascinated, his attention drew away from the chanting priestesses. Black feathers drifted down and drops of blood spilled like tiny droplets of rain onto the grass.

The priestesses ceased their strange monotonous chanting and peered skyward at the warring birds. One raven spiraled down, it’s wing askew, falling just beyond the table where his grandmother’s lead-etched question lay inside the painted jar.
The crones hurried to her, their eyes startled. “Zeus Ammon has spoken. The warring ravens tell of dark destruction!”

The child felt a chill and sucked in his breath, both frightened and horrified by what he had witnessed. When he looked up at his grandmother, he saw that she had a strange smile on her face.
* * * 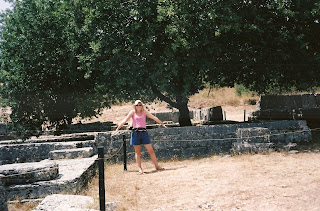 Ha! I fixed the ad so it's not so blaring, but they snipped came out without the proper indentation.

I didn't notice the ad until you blogged about it, and then I had to go back and look, lol. (so unobservant is Sam...)
Loved the excerpt - oracles are such an interesting concept. I'll post my oracle snippet today - it will be oracle day on the net!
:-)

Check out Sam's oracle snippet. Quite a different angle writing from a time-traveler's p.o.v. Lots of fun!

I guess this is the time of year that poor Persephone has gone back to the Underworld. Boohoo...

So Olympias thinks the destruction is for someone else? Do they ever learn from history? ;)

Hm, let's see if I can come up with something oracle-ish for the Friday snippet.

Since you seem to be here
more these days, I refer you
to Happy Birthday, Baby
(January 4, 2007).
I left a comment there
and I do hope you have
the time to go back and read it.
Memphis
memphis.deville@gmail.com

Gabriele, I'll post a bit of a snippet from the follow up soon. In writing it I couldn't help but note the glaring parallel about what is going on today You're right. Times do not change. History repeats itself.

Memphis, I am trying to figure out who you are, reviewing all the wild and crazy past of the Hazel St. house. I did leave a message on "Happy Birthday Baby". Thanks for responding.

Loved your snippet, and the ad was not too intrusive.

Hi Adrian, thanks for reading.

Yes..Now know who Memphis is...a long lost friend of mine. Wow! The wonders of the internet!