THERE WERE TWO 9/11s.
The first was September 11, 1975
when Gen. Augusto Pinochet staged a military coup in Chile backed by the C.I.A.
On September 11, 1975, my late friend Anibal recalled seeing planes flying over Santiago bombing the media buildings
and the Presidential Palace. This coup resulted in a blood bath that lasted years, resulting in the death of democratically elected Salvatore Allende (in the Presidential Palace) and thousands of other men, women and youths who were killed, imprisoned, tortured and 'disappeared'. Many others, like my friend, escaped but were forever affected and traumatized by what happened. Pinochet finally died in Dec. 2006 without ever having faced punishment for his crimes against Chile and the Chilean people. 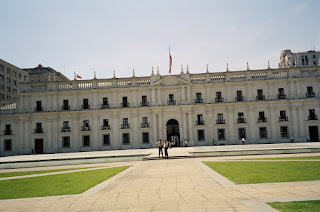 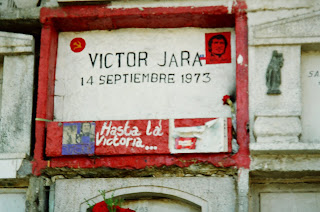 Grave memorials for Victor Jara, a popular university professor and folk singer who was tortured and killed in the stadium 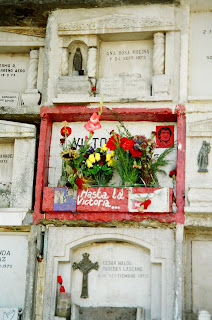 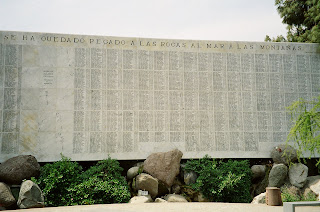 The General Cemetary of Santiago is full of graves marked Sept 1975, all victims of the junta. I was most impressed when I visited at the number of young people, many who wouldn't have been born then, who were bringing flower tributes to the graves of Allenda and Victor Jara.

AND THEN THERE WAS THE GREAT TRAGEDY OF 9/11 2001 IN U.S.A
When I was there last year on the day of the memorial I didn't visit the site
but I went on the round Manhattan boat tour
and saw the great gap between the buildings where the World Trade Centre had once stood, and eerie reminder of a tragedy that changed the world.

*** I blogged some photos of NYC but they didnt' come through on here. When I was there last year, the whole city was preparing for the memorial and even Canadian police and firefighters were there to participate.