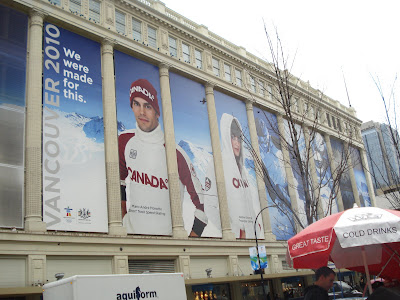 PICTURES OF CANADIAN OLYMPIC ATHLETES ON THE BAY STORE

Progress on my novel, Shadow of the Lion, has slowed down considerably over the past couple of weeks. This is because I was offered some extra work by Planet Eye http://www.planeteyetraveler.com/

in addition to the four stories I week in The Vancouver Guide.

The 2010 Winter Olympics and Paralympic Games has created a hubub of activity in the city. Barricades have gone up on the venues, road closures, so much security you'd think we were living in a war zone, and downtown things are shaping up to a circus atmosphere. I have been invited to help compile a city guide for Vancouver during the Games with things like hotels and restaurants near the venues etc. In addition to compiling these lists (some I have started on already) I will have to post at least 1 item a day plus the four stories I post blog-style in The Vancouver Guide.

At first I was slightly overwhelmed when I assessed the amount of work I was getting myself into. But practicality told me "Writing is your work, and this is an additional 'job' -- with pay! So go for it!" As I stood there one evening clipping articles about events and venues from the newspaper I was immediately taken back to myself, age 19, working in the Vancouver Sun news library, clipping stories to file in the crime and biography files that I was in charge of. I've come full circle. Back then, I wanted to be a reporter. I ended up in the news library instead. But now, all these years later (still clipping newspapers) I am actually a 'roving reporter' snooping out news for The Vancouver Guide. And here's a whole new opportunity to add to my resume. 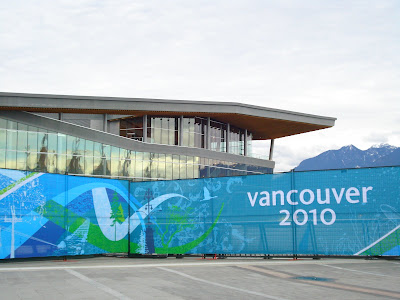 BARRICADE FENCES UP AROUND THE NEW CONVENTION CENTRE

Needless to say, I was not about to let this opportunity slip through my fingers. So I've had to put the novel on the back-burner for a couple of weeks. Meanwhile I am squeezing in a bit of time for editing and have the notes ready to write the next chapter segement. Then there will be just one chapter to complete plus work on the prologue and epilogue. I had thought I'd be finished by now, but practically speaking, I need to make money too. So I have accepted this new challenge.

I will be going around to as many venues I can get to, those will be the Free Live sites as I certainly can't afford to attend any of the sports events. I'd hoped they could get me an unacredited media pass but I don't think that's going to happen. So I'll just have to put on my Roving Reports cap and do as much snooping for news as I can. I've already figured out a list of stories I can write and pre-post for the Vancouver Guide. It's quite overwhelming when I think of all there is to do, but I gathered my wits and made an organized plan.

So keep an eye on The Vancouver Guide, and when the Vancouver Olympics City Guide is up on the site, I'll let you know. Let the Games begin! 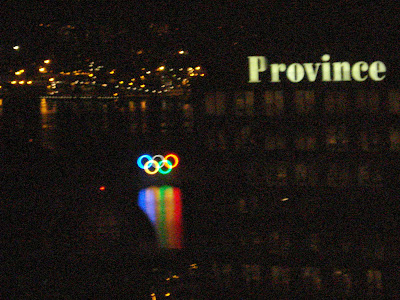 THE OLYMPIC RINGS LIT UP IN THE HARBOUR

Congratulations on your exciting new work surrounding the Olympics! It must be cool to be right there, where it's all going to happen. I'll be sure to check out your articles, and follow along with Olympic news as well when the games begin!

You'll get back to your novel in due time! And I'm looking forward to hearing that it's done after so much effort on it. I know you will feel really good when you can finally declare it complete. (Now, if I can just get my own work to that point!)

HI Adrian, thanks for your encuragement and comments. I've been preparing (in my mind) another blog but haven't had a moment to sit down and write it what with all this Olympic fever going on. By Tues. this week my brain was mush -working on deadline. But things are evened out now and I have a plan so I can stay organized with what I have to post as the events happen. It's fun though. It's being that real roving reporter I always wanted to be.
Be sure and keep checking the Vancouver Guide for updates.
and I'll try to post here too. I feel I've been neglected my blogs lately!