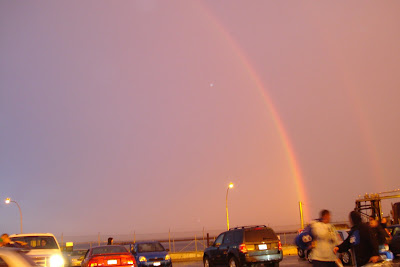 A DOUBLE RAINBOW
After a busy few weeks, some little trips around and lots of social activity, I'm finally back on track and moving ahead. The other week I was on Vancouver Island attending a family beach party and when I got off the ferry coming home there was a storm with lightening, rain, this double rainbow, and in the west, a blazing tangerine sky. It was phenomenal. I felt it was almost like an 'omen' , because during that weekend away I had time to think and plan my next moves when it came to the stalemate I'd been in with the writing of Shadow of the Lion. 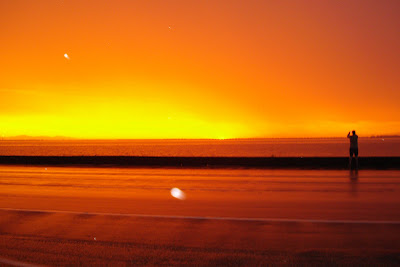 TANGERINE SKY
That weekend my cousins and I had been discussing several books and movies that were written from historical (past or near) facts but in which some of the facts and characters were changed in order to make a better story, adding tension and keeping it a page turner. One that I'd seen recently was "The Last King of Scotland" about Idi Amin, in which the main protagonist was his doctor. In reality, there were about five doctors attending Amin, but the author had chosen to make a composite character for the sake of the story. "The De Vinci Code" is another one where the author skewed the facts but people bought it.

These authors are writing Fiction based on Fact, which is what I'm doing in Shadow. For the sake of a good story-line sometimes you have to twist the facts and unless it's something glaringly wrong, fiction writers get away with it. Most people read historical fiction to enjoy the story and learn a few things about past times. Historical fiction is not meant to be like a thesis or history book in which facts need to be 'proven'.

That same weekend, reading a book review for a novel about Charles Dickens' wife, the reviewer stated: "A historical fiction writer can take any number of liberties with the facts."

That was the statement that freed me, so that I was able to go back to my writing without being so concerned over every little detail. I've always tried to be meticulous with my research and putting the correct facts and details in my story, however as there is so much conflicting data it becomes confusing. Who to believe? And anyway, who was actually there to tell the truth of what happened in these events? Most of the histories about Alexander, for instance, were written hundreds of years after his death.

I had consulted a Classical scholar friend who has been in on this project for quite a few years, because I was upset over some rather harsh critiques I was getting on this site in regards to 'the facts'. For one thing, she set me straight by telling me that in those ancient days 'dates' as we know them, were not used. Times and events were recorded according to festivals or olympiads etc. Dates like "316 BC" are the numbers recorded by modern historians. She encouraged me to ignore the critiques and go ahead with my plan for the plot. Up to now I have tried to keep major events as exact as possible, but this particular event concerns a minor character, and what happens to him foreshadows very strongly what is likely going to happen to my main characters, Roxana and her son, Iskander.

So, when I came back from my weekend away I began to go through my recent chapters and see if I was too far astray enough for it to be a major flaw. And it wasn't. I decided to change the order of a few things and add some new bits. So I've spent the last few days editing and rearranging and moving forward. If the 'historians' don't like it that I have this episode concerning a minor character happen on a date they don't find 'exact', well, that's too bad because I am NOT writing a history book. I'm writing Historical FICTION, so whether a minor character dies in "315" instead of "316" shouldn't make a huge difference on whether the story is well written, and a page-turner. Who was actually there to say this is wrong anyway? Diodorus certainly wasn't there and neither were the other ancient historians, so I doubt that what they wrote was actually accurate or the 'gospel'. And who knows how 'accurate' all the info in the Bible is for that matter? (We celebrate Jesus' birth in December, but that's probably not when he was really born. And that was a major event in history.)

And so, I am trying to stay focused now and not let any further conflict deter me. My scholar friend also advised me not to post any further segments of the novel on my blog. She's probably right. But I'll see, as time goes by whether or not I should. I don't want any further commentary on my work to deter me enough that I stall again when I'm so close to finishing! 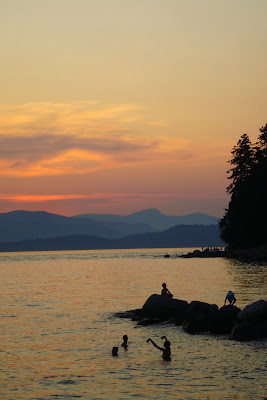 It is a great pity you read intent where none was intended; "conflict" where none existed and "harsh critique" where a helpful correction was the intent.

I'd gathered from the amount of questions regarding incidents and incidental historical characters you'd asked elswhere that observations of potential error might have been uselful.

My error and a large one at that. Not to be repeated.

Apologies for any "conflict" you may have thought yourself in.

I do hope you publish.

Christmas, by the way, is a Roman celebration. When one adopts a religion it is best to make it fit with the staus quo somewhat...

Unfortunately, because I have been so careful with facts (when this is, after all 'fiction') it was a large enough bump in the road that it set me right off course. But now I've sorted it out and I'm back on track again.