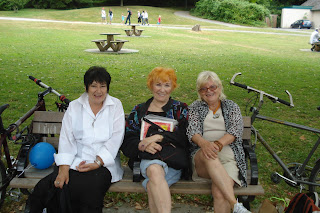 I've certainly had my share of fun so far this summer. A couple of weekends ago it was the Summer Dreams Literary Festival in Stanley Park but on by the Pandora's Poetry Collective. Here's a photo of us gals: Me and the two poets, brunet Diane Laloge, red-head Irene Livingston and me, the blonde. Both Diane and Irene were reading and interviewing at the festival and I was helping out with registration and other things like being a photographer. A very pleasant way to spend a Saturday afternoon. 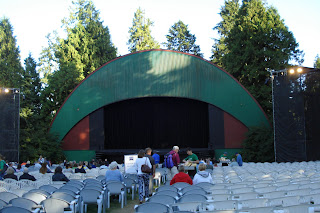 The following weekend I went to the Theatre Under the Stars in the park to see "Jesus Christ Super Star". I have been attended this outdoor theatre since the '50's but it had been quite awhile since I'd seen a show there. It's always a lot of fun, especially on a warm summer night. We had good seats close to the front. The production is all local singers/actors/dancers and was very well done. In a couple of week's I'll make my yearly visit to the Bard on the Beach to see a Shakespeare play. Vancouver is lucky to have these two out-door theatre venues. The Bard is under the tent with an open backdrop of natural scenery so even if it rains you can still attend. But I'm hoping this hot sunny weather will continue a few more weeks! 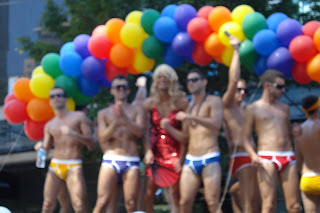 Last weekend was the annual Gay Pride parade and I went along for the fun although this year I went alone so it wasn't quite as entertaining as usual. I took lots of photos and enjoyed it -- amusing and all good fun. Later I met my old friend Tom at our long-time haunt, the Dover, for a few pints. Then we went to another old-time haunt, The Rooster's Quarters and met his wife there for chicken dinner (Montreal style). Always yummy.

In addition to the fun I've attended some other interesting artistic and theatre events. My friend Jabbar had an exhibit of his paintings this week, then Friday I went to a Cuban movie and reception. Saturday I finally got to see "Mama Mia" (the musical) and later went to a play about Zimbabwe "Super Patriots and Morons" by Zimbabwean playwrights Raisedon Baya and Leonard Matsa. The play was eventually banned in Zimbabwe because of it's political content.

In between all this, I've been writing so there's be another Progress Report about my novel soon. I am also doing a bit of travel writing as I have the possibility of writing for an on-line travel trade publication. More about that later.

I've spent my Sunday (today) at home because I had to catch up on all the writing. The sun is shining again, after a brief rain, but I'm waiting for my neighbour to call as I'm hoping to meet a writer friend of his.

So, that's been my busy life so far, but most of it has been focused on things artistic. Once in awhile, though, we have to just enjoy the moment and have some fun away from the serious business of putting words to paper. I hope your summer has been fun too!

Oh Wynn, what wonderful pictures and what a ball you must be having this summer! I loved reading about it all.

I notice the one of the hunky guys in underwear is the blurry one but I figured that way they couldn't sue me for using their photos. teehee...
I had others...humm...

Yes It has been a superdooper summer so far and the writing is going well too. Hope yours has been great too!