THE FESTIVAL OF WRITTEN ARTS 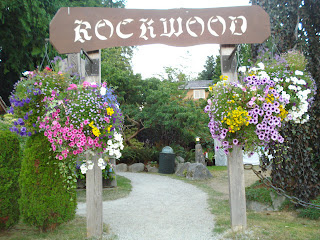 This weekend my friends and I went for a weekend on the Sunshine Coast to the Festival of the Written Arts at Sechelt, a small town on the Sechelt Peninsula. It's been a number of years since I attended this writer's festival and I was so pleased my friend Dianne suggested we go. For one thing, the location is one of my favorite places on the Coast. When my family had their cottage on an island nearby I fell in love with this part of the Province. Being back there again reminded me of those days, and of all the other fun festivals I've attended in the past. One year I spent a week at Rockwood Lodge at a women writer's retreat, another unforgettable event in my writer's life. The lodge isn't there now (too bad!) and I do hope they might rebuild it. There's just the performance hall and admin. buildings on the grounds which are surrounded by gardens and trees. It's quite an idyllic setting, and close to the seashore too. 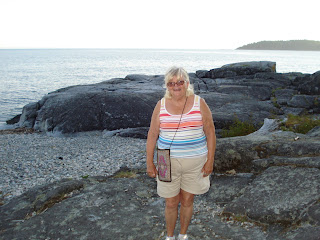 Being part seal or probably dolphin, I love the sea so this was an excellent way to spend a weekend. Besides the sun (which was beaming down full-force all weekend) and the inspirational company, there was the long stretch of pebbly beach and the forest all around. My kind of setting! Here I am on the rocks, just before sunset not long after we had arrived there on Friday night. We eventually got to swim, but went to the wrong beach and it was too stony. It was refreshing to dip into the ocean though and to smell the fresh sea air. Luxury!

We took in a couple of of events but some of the best things were sold out. However the night we arrived (Friday) we sat outside the performance hall and listened to an interview with writer Elizabeth Hay ("Late Nights on Air"). The next morning we took in two events. One was with Mike McCardell, a well known TV figure formerly NYC crime reporter. His latest book is "The Blue Flames That Keep Us Warm: Mike McCardell's Favorite Stories" He's a very entertaining and personable guy. He usually appears after the news with a human interest vignette that he shares with viewers.

The next reader we heard was Lorna Goodison, a Jamaican/Canadian writer who read some touching excerpts from her memoir "From Harvey River: A memoir of My Mother and Her People" I will definitely buy her book! She is also an accomplished and well-published poet and winner of an award for Canadian Non-Fiction. In the afternoon we heard Claire Mulligan an award-winning short fiction writer who wrote "The Reckoning of Boston Jim", her first novel. She was being interviewed by Sheryl McKay, host of CBC Radio's "North by Northwest"

That evening we sat outside and listening to the keynote speaker, Chantal Hebert, a French-Canadian political writer.

What we missed this time was the lack of the lodge because after the performances in the past, there was usually a reception held there and you could schmooz with all the writers and sometimes get chances to chat personally with them. I also missed the lodge as that's where I'd stayed when I was at the women's retreat. They also used to house the guest readers there. Other than that one small disappointment, it was a super weekend and I returned to the city Sunday afternoon feeling quite revitalized and ready to launch into more writing. (Which I did today and polished off four more stories for the Planet Eye as well as editing a recycled travel story of mine that is going to be published again. Then in the evening, I met my friends at the Yaletown gallery for a poetry book launch and reading by poet friend Diane Laloge. There was music accompaniment and wine and cheese. In all a very rich and inspiring weekend!

And yes...I have completed another chapter segment of my novel besides all the other writing I've been doing. So I'll be posting another "Progress Report" very soon. 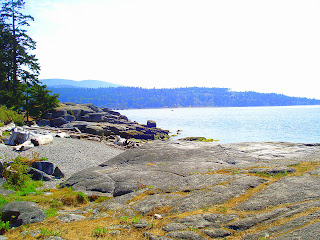