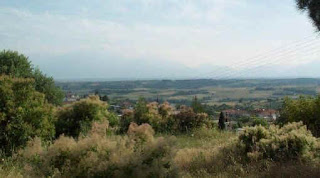 View of the plains behind Pydna and Mt. Olympus

I've finally started to feel remotely 'recovered' after a long bout with a cold virus.
In the last few days, as the sun was shining (though it was unseasonably cold) I ventured out on various errands -- prepared the handouts for my night school classes which begin next week, and delivered them; went to the lab for blood tests; and today I got up very early (6 a.m.!) in order to attend a travel agent/media breakfast for a Norwegian cruise line. The rest of the time I've been doing market research for travel, a bit of editing for my travel site, and finally tonight I got out the manuscript of Shadow, read through the last bits I had been so diligently working on up to a week ago, and prepared myself to move along.

A few years ago I had actually visited the site of ancient Pydna on the north-east coast of Greece. Fortune had it that day that I was introduced to the archaeologists who were working on the digs there. I met the archaeologist who had just discovered the trench that Kassandros had dug around the fortress blocking Olympias and the royal family inside for the winter, with dire consequences. At the time, they told me they were searching for a tomb for Olympias -- which, they said, would likely be just an ornamental memorial tomb as they felt her body had likely been moved to the royal tombs at Vergina some time after her death by stoning at Pydna. There wasn't much else to see there but it was quite a thrill to just be there, at the place, where the Epirote queen (Alexander's mother) had died. I imagined that from where she stood, surrounded by the kinsmen of people she'd had murdered, that she could look up toward Mt. Olympus and will herself to be transported in spirit to the home of the Gods. And here I am, once again, in that place - Pydna - on the brink of another crises that ends in tragedy.

I tried to find my own photos of the place but in their stead I have posted some that I found on-line. It gives just a hint of what it was like there. Pydna was a sea port with a garrisoned fortress commanding the seaway of the Gulf of Salonika.
Olympias had insisted on moving the royal household there from the palace of Pella - a crucial mistake, it turned out. Here's just the beginning of the next chapters where everything starts to go horribly wrong. 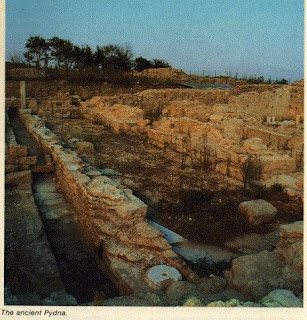 The ancient fortress of Pydna
THE MOVE TO PYDNA

The palace became a hive of activity as preparations were made for the move to Pydna. By mid November, they made their way south. The royal household travelled by horse and mule-drawn wagons, surrounded by bodyguards. They accepted guest-friendship from their allies along the way, pretending all was well. The army and the lumbering herd of war elephants had gone on ahead to confront Kassandros’ troops at the border. Soon a treaty would be signed and the threat of civil war would be over.

A week later, from a distance they could see the imposing fortress of Pynda lying in the shadow of the mighty heights of the holy mountain, Olympus, and the wild pine-clad range where wolves and lynxes roamed. A wreath of thick, dark clouds hid the dazzling peak where the Gods dwelt.

The weather was still mild, the breezes gentle. Below the ramparts of Pydna the white-crested sea churned. Soon the ships would come and the war would be over, Kassandros defeated. 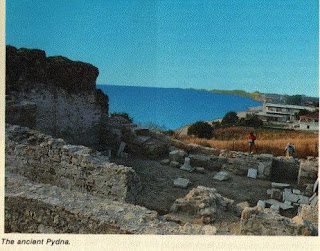 View of the coast from the ramparts of Pydna's fortress

I'm glad you're feeling better! The sun has come out here too, and it makes a huge difference!
I love those photos - it's too bad we can't have a time machine camera to take pictures of places as they were when they were just built!

I'm also glad you're feeling better. And I really like the picture you included. I wish I had more time (and money!) to travel. Just saving up for a trip to Greece has been difficult.

I'm really looking forward to reading more of your novel. I hope you reach your goal of getting it wrapped up this season. :)

Thanks Gals. I am feeling better but taking it easy so I don't get a relapse. Working on a bit of editing and should be back into the swing of Shadow by this weekend. (Last night I just read through the recent rewrites and actually I had more written than I'd remembered.

I wish I could find my own photos of Pydna and will have another search through the archives this weekend. I feel so fortunate to have actually been able to visit these site.

Meghan...here's the trick. I file a self-employment tax refund along with my regular tax and because I can deduct so many expenses for travel etc I end up getting back every coin I've paid in. This year nearly $1800. My ticket to Chile/Argentina for next Fall.

Wynn, a/k/a Ruth Kozak, did you, by any chance, live in Lethbridge, Alberta during your junior high days, back in the late 50's?

va-anne...no I did not live in Lethbridge. I am a Coast person (from when I was 12) and live in Vancouver
although I was born on the Prairies - Estevan --and lived in Lloymister and Edmonton.

It helps a lot to have actually seen the places where your novel is set, doesn't it?