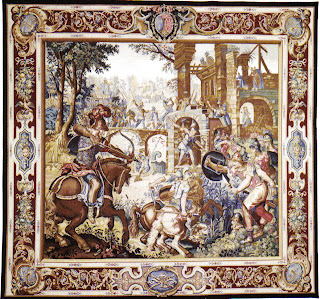 I look at the construction of my novel "Shadow of the Lion" much as if I am weaving a tapestry. Each thread (like each word) must be placed carefully, in order to form the pattern until the picture unfolds (just as a story develops). I see each character in the story as a coloured thread woven throughout this vivid tapestry. For instance, the 'shadow' and spirit of ALEXANDER is the golden thread that weaves through the entire tapestry. His young son, Alexander IV, (ISKANDER) the titular child king who inherits his throne, is a silver thread. His Soghdian wife, ROXANA is magenta , while his mother OLYMPIAS is purple murex. PTOLEMY, who established Alexandria and the first Ptolemaic dynasty, is royal blue. KASSANDROS, Alexander's rival and eventual nemesis, is a black thread. Each of the other main characters (some who are fictional) are also 'colour coded' : NABARZANES, the Court Advisor is peacock blue, while the MAGUS is ivory. The differences between the opulent, aristocratic Persians and the rough highland warriors of Macedon prove a colorful contrast in the warp and weft of the prose. I must stand back once in awhile and look at this creation to make sure that the pattern is clear, the colours balanced, no threads are left unwoven leaving gaps in the picture. When it is finally finished, I hope it will be a masterpiece. 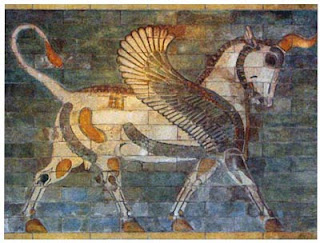 Tapestry reproduction of a winged bull taken from Nebuchadnezzar's palace, Babylon
You could also look at the story as a mosaic made of carefully placed tiles or, as Macedonian mosaics were, made from various colored river pebbles. Either way, the story and the words and characters that fill the story, compose a panoramic picture.

I have managed to complete another chapter and start a new one even though the Christmas season was busy and distracting. Now it is 2008 and the novel is almost done so I must stay 'at the loom', so to speak, weaving away until the last thread is tied in place.
Or, as in a mosaic, the last pebble or tile is laid. 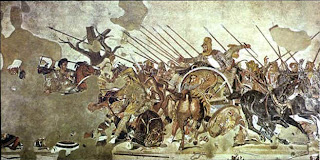