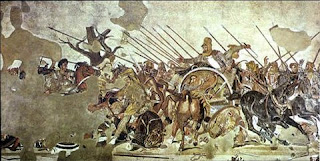 Mural, "Battle of Issus" Alexander the Great vs Darius, king of Persia.
When I first sent off my manuscript of SHADOW OF THE LION, the writer, Steven Pressfield, had some very astute advice for me.  In part, this is what he said:
I happened to have been talking to some fighter pilots recently and they told me one of the axioms of air-to-air combat. The most dangerous moment in a dogfight, they say, is immediately after you've shot down an enemy plane. Because in that moment, you may let your concentration lapse. And that's when someone jumps you and shoots you down.
I would say the same is true for writers. The dangerous moment is just after you finish a book and ship it off. My own ironclad principle is to IMMEDIATELY start another book.
When you're immersed in a new project, you're not as apt of obsess over the fate of the one you just finished. You don't check your mailbox or your Inbox compulsively. You resist the temptation to measure your worth and the worth of your work by the opinions of others.
The other thing I have found is that when you start Book #2, whether you realize it immediately or not, you are already working at a higher level than you were on Book #1. This helps too, when publishers, editors and agents (who are notoriously slow to respond, sometimes taking MONTHS) don't get back to you with the lavish praise you were so hoping to hear IMMEDIATELY.

Listen only to your own heart. Hang onto your emotions. The next weeks and months will be a trial, so be ready for it.  "Start the next one tomorrow."
I have carefully followed Steven's suggestions all the way through.  In fact, I actually hid away my manuscript of "Shadow" so I wouldn't obsess on it. And yes, I started that new novel. Well, actually it was the one I had started before I decided to write "Shadow" so I brought it out of the archives, dusted off my research files and started to retype it into the computer (it had been written on a manual typewriter).  So far so good. My writer's group loves it and I am having a great time renewing the research and getting to know the characters again. 'Dragons in the Sky" is a Celtic tale set in the 4th century BC with an Alexander connection told in the first person by a young Celtic girl, almost a past-life regression kind of story.
Meanwhile "Shadow" has been in the hands of an agent for several months.  But finally, in spite of saying how much he'd enjoyed reading it and that it was a 'wonderful' story, he decided against signing me on.  What to do next?  I knew this was the way things go with submissions so I did have a list of possible publisher to pitch it to. Immediately my mentor Scott Oden suggested I send to the assistant publisher of a publisher company he is familiar with. So I did. And that's where it is now.  And if that try fails, I'll go for another, and another.  Because what is required when you are trying to publish a book is PATIENCE and DETERMINATION. 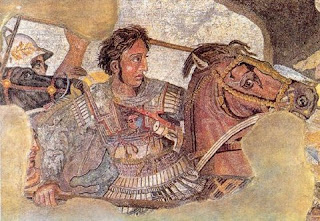 Detail from the mural: Alexander showing his determination.
Alexander the Great and, before him,  his father, the formidable warrior, King Philip of Macedonia, went fearlessly into battle and never had one defeat. Their bravery and determination and skill as strategists made Macedonia the ruler of the world, dominating Greece and defeating even the mighty forces of Persia who had dominated the Asian world.

I am lucky to have an army of supportive friends and admirers who are cheering me on and backing me up.  So I will keep on pursuing my dream until it is realized. I KNOW "Shadow of the Lion" is a worthy cause.  I put my whole heart into it and gave it my best.  So in the end, if I persevere, I know I'll eventually win the gold. 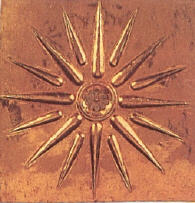 Great post! I'm cheering you on, so keep pushing. Best of luck in the agent hunt! Be fearless, d:)