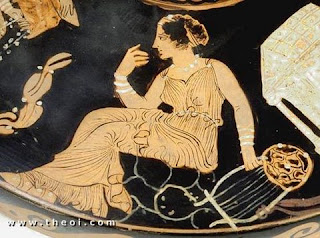 When I'm writing or editing I like to listen to inspiring music.  If I'm working on "Shadow of the Lion" as I am just now, doing some final edits, I prefer to have classical music playing.  I find it adds a soothing background while I work.

In the ancient days story tellers and poets always used music as part of their platform, such as the lyric poet Sappho who played a lyre to accompany her verses.  And the bards of the ancient Celts also used music to record their tribal stories.

But I think you have to be careful what musical background you use as you write.  I could never listen to rap or current popular songs when I'm working on historical creative writing.  It's important to be able to hear the cadence of the prose as well and this would only interfere with the rhythm of the words.  When I was reworking my play "The Street" I listened to jazz, specifically the music of Chet Baker and other well known jazz musicians of the '50's.  When I was writing "Dragons in the Sky" I listened to Laurena McKennitt as her music is very Celtic.  For "Shadow of the Lion" I choose classical music, sometimes the sound-tracks from movies, to give it that "epic" feeling.

Do you listen to music when you are writing?  If so, what kind of music do you choose?
Posted by Wynn Bexton at 9:50 AM

I have to listen to the same song over and over again while writing so it becomes background music. And like you, I believe that the song has to fit the book. For my YA I listened to Taylor Swift. Haha. How unoriginal

Thanks for your comment Jenna. I think the music has to fit the genre you are writing otherwise it will be a distraction. I could never listen to Taylor Swift while I'm writing historicals! (not even jazz, my favorite!)