Some Endings, Some New Beginnings

The end of 2010 was exciting for me when I finally finished writing "Shadow of the Lion".  Starting off the New Year, I took a little break from the novel and continued with other writing, tried to catch up with some long-delayed travel stories, and of course my weekly writing for Planet Eye (www.iStopOver.com) which I've been doing since 2008.

In February I went on a little trip to the mountains, a lovely ski resort "Sun Peaks" and when I returned I prepared to write a special assignment story about it for Planet Eye. The day after I returned from my wonderful family holiday in the mountains, I was shocked to learn my landlord had put my apartment up for sale.  The night before, when I arrived home after my short vacation, I had marvelled at how much I loved my dear little place and how happy I have been here for the last 4 1/2 years.  Then the bomb dropped!  I have been living in limbo ever since, not quite sure if or when I will have to move, or what I'll do next.

I did get the assignment story ready for Planet Eye written and also a couple of other travel stories which I intend to market.  Meanwhile, I also began the editing of Shadow of the Lion. 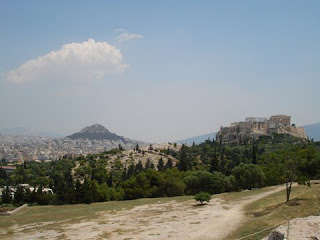 The Acropolis from the Pnyx
Today I completed Part IV,  revisiting Pella in Macedonia and Athens.  It was interesting reading back the dialogues between the new Regent and his Assembly,  the antagonist Kassandros and his crew as they plot to overthrow the Regent, and the Senators in Athens arguing about how they will get the Macedonians out of their city.  I've been enjoying my journey back to these old familiar places with the characters I grew to know so well.﻿
I'm looking forward to travelling again and hope that the disruption of my impending move does not interfere with my plans to return to Wales and Greece this summer.
Meanwhile, my work with Planet Eye has ended after a long stint with them (since 2008) because iStopOver is no longer publishing their stories.  I will use this new 'free' time to catch up on travel writing.  And as soon as I am able to I'll dig the old manuscript of "Dragons in the Sky" out of the closet and start retyping it into the computer with the intention of finally finishing it. (I had quite working on it when I started Shadow)
There's lots to look forward to even though I will be regretful at having to move from my cozy little apartment.  Who knows when that will be?  I just have to wait and see and anticipate a bright new beginning.
Posted by Wynn Bexton at 5:01 PM