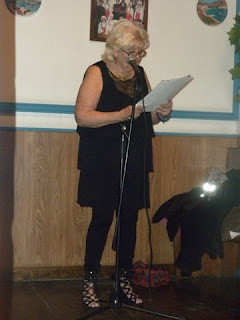 Me, reading from "Shadow of the Lion" at the wrap party.﻿
These days, aside from some travel writing for http://www.istopover.com/ and working on some of the travel stories that I have back-logged in my files while I spent time on Shadow of the Lion,  I have begun the final edits for the novel.
I try to do a few chapters a day, red pencilling in corrections and making notations for changes or omits.
Yesterday I spent 3 hours with my critique reader going over some of the parts she has been reading for me.  She was enthusiastic about the story, amazed at the research and the character development.  And was impressed with the way I've built the tension throughout, which was good to know because in such a long saga it's hard to tell if you've done this or not.
She says she is enjoying the story so much it's hard for her to choose what I should cut.  But I know the novel needs lots of cutting so I guess that means the 'editor' (me) will have to be a bit brutal.  For now, though I'm just noting the places that probably can be eliminated.  After all the red pencilling is done, I'll start working from hard copy to computer again and set up a new file for the more polished version.
It's a bit strange being the 'editor' now, instead of the writer.  I have to admit I miss my characters and wish they were still running around in my head, but I can't let them interfere with the technical work so I've had to put them out of mind.  I think that taking a week or two break before starting the editing was helpful, as I am now more distanced from the story and can be more objective.
Today I spent several hours with an actor friend who is going over the first act script of my play about Sappho, "House of the Muses".  She has been reading and critiquing it and gave me loads of helpful hints for improving it.  Looking at the play script is different from the novel and what she has pointed out is important for me to know.  She also suggested perhaps I should take another playwright's course to workshop the script which I think would be an excellent idea.
However, one thing at a time.  I must not get sidetracked from the work on Shadow so I am not intending to work on the play until later.  When I took the workshop at the playwright's centre a couple of years ago I didn't get any of this valuable feedback and that's why I got discouraged with it, even though I knew it was a good idea.  Now at least I know where I can begin and what to do to make it better.  That in itself is pretty exciting.
So, for now, the busy bee editor has lots to do with her novel manuscript.  But sometime before too long the writer will go back to work on new projects.  I'm quite excited about those prospects!﻿
Oh yes, take a look at my website and you'll see a page about Shadow of the Lion.  I still have another couple of pages to add later on -- one for plays and one for travel. http://www.ruthkozak.com/