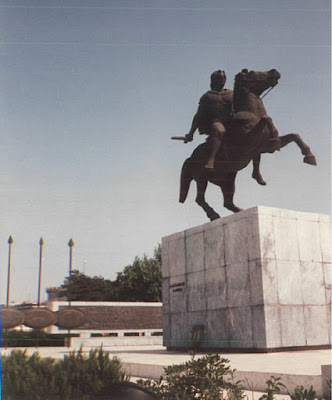 I can hardly believe that I am at the final countdown, the last chapter of this long saga about the fall of Alexander the Great's dynasty. Of course, now I've reached this last chapter I'm encountering a lot of 'resistance'. Partly due to lots of distractions such as my classes, editing other people's manuscripts and writing for Planet Eye Traveler. But I'm hoping now that it is a long weekend here, to get some time to catch up and at least get this last chapter drafted out.

Besides the final chapter, I have a bit of work to do on the Prologue and Epilogue but both are partially written.

It has been a long, long journey and it's hard saying goodbye to the people I've grown to know so well. And what makes the final chapter difficult is its tragic ending.

In the previous chapter segement, I bid a sad farewell to one of my favorite fictional characters, Nabarzanes the Persian Court Advisor. He's finally left his long exile and is heading back home to Babylon.

The next morning, as the dawn reddened the eastern sky, Nabarzanes left Ephesus. The city was silent, the streets still hidden in shadows save where a lamp was lit above a door. He had dressed in menial clothes, a homespun tunic and trousers tucked into his soft leather riding boots. He wore no jewelry to display his Persian wealth. The plain clothes disguised him as a travelling merchant, but there was no way to hide that he was a Persian with his ivory skin and sable hair. He travelled light, a goatskin wine bag, a flas of water, a few almond biscuits and dried figs and a small bundle of his personal possessions. What he'd need for food would be provided in viallages along the way. By day he would ride along the King's H ighway, mingle with other wayfarers. By night he would sleep among soldiers who guarded the byways. The Royal Road was well travelled, the craggy heights guarded by ancient fortresses, some that had been repaired by Alexander when he had passed that way years before. There would be caravans on the road, merchants and other travellers making for theports: Phoenicians with blue dyed beards, bejeweled Karians, slaves from Africa bare to the waist, their skin sleek as ebony. Soldiers, Persian merchants, veiled women carrying burdens n their heads trudging beside the donkeys their menfolk rode. Shaqal's long stride would cover the miles quickly down the coast, and across Syria to the Babylonian border, but it would be a good few months or more before he would reach Babylon.

He nudged his heels against Shaqaql's flanks to spur his horse forward, down the hill to the Street of Marbles, south out the city gate.

"Come my faithful steed. Speed us on our way. We're going home."

Sooooo close! Hopefully the Muses will give you that extra boost you need to finish the novel! Great excerpt as well. :)