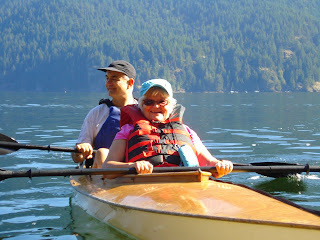 This past week has been a time of several 'firsts'. I'm living the life of the 'roving reporter' these days, submitting stories weekly to Planet Eye (www.planeteye.com) and as a result have had a couple of great opportunities to do things I had never done before. First was this kayaking tour.
I've so often watched the kayakers out on the waters around Vancouver, but never imagined me being out there. But as a result of requesting an interview with an adventure tour operator, I was invited to join one of the kayaking tours up the Indian Arm inlet near Vancouver. What a thrill! I'll be writing a longer blog just about this on my travel blog, so watch for it. And I've already posted a short blurb about Lotus Land Tours on my Planet Eye "Vancouver Expert" page. 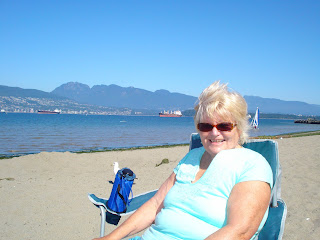 LOUNGING ON THE BEACH IN MID SEPTEMBER!

After a rainy August, the summer weather returned in September and I was able to spend a day at the beach with my son and his wife picnicing and sunning. We did intend to swim but the water was chilly and a lot of algae floating around the shore so we opted to just sit in the sunshine. There were a lot of sail-boarders out in the Inlet and kite fliers on the shore. It was a lovely day just to relax in the midst of a very busy time.

My friend Patrick arrived from Germany for a holiday and I have been very busy preparing for my new writing classes which all begin this week. One new memoir group started last Tuesday, a small group which I agreed to do even though it means I won't get paid that much. I wanted to establish myself in this new community centre and the few women who came are very nice so it should be interesting. This week I start my other new Life Writing group at Brock House, which is a prestigious group out near the university, and also my other downtown group that has been going now for several years. I have two night school classes starting this week (novel and travel writing) and next month a "night school in one day" Memoir class.

So, along with these preps, visitors, other social events and writing my weekly blurbs for Planet Eye, I haven't had much time to work on my novel. However today is a writing day at home and that's what I will be doing for the rest of the day. Tonight is my writing critique group. So it will be day-long writing for me, something I've missed lately! 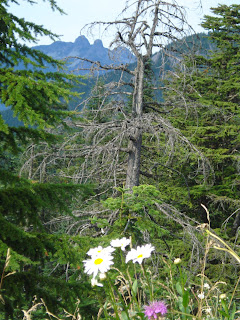 A DAY ON THE MOUNTAIN

One of the other 'firsts' that I did last week was to take the gondola up Grouse Mountain. With Patrick along, it made for a grand day. I had never been up Grouse on the gondola. The last time I recall going up there (on the t-bar) was when I was 14. I was reminiscing to Patrick
(who is from Germany) that when I went up Grouse back then, I was with some young German visitors and was trying to speak German to them (which I studied in school for two years -- and never mastered!) They kept laughing at my attempts. I gave up the language after that. I never did care for the sound of it compared to Spanish or Greek. I never mastered French either, although I should have because I live in a bi-lingual country.

Anyway, Patrick and I went up Grouse for the day. It was another warm sunny September day and although the view from the top was a little hazy, it was just lovely up there. Some of the entertainment was finished for the season but we did see the logger's show and had a look at the two grizzly bears in their habitat and also the wolves. I will write a travel blog about this adventure on my http://travelthroughhistory.blogspot.com site. This was also an opportunity for more stories for Planet Eye. I'm really enjoying being the Roving Reporter! (and I get paid for it too! A bonus!)

The next day Patrick and I went to Little India (the Punjabi Market) and a quick browse through Queen Elizabeth Park which was still gorgeous with all the flower beds and green mowed lawns. Having this Vancouver Expert's job keeps me on the go trying out new places, doing restaurant reviews, exploring areas of the city I've never been to before. So it's quite a lot of fun and there's no end of things to write about.

Check out some of my stories there. They are quick and easy to write. Not a long slog like the historical fiction is. But...I promise...I'm back to work on the novel right now! So there'll be another Progress Report coming up soon!

Viagra is the world renowned medicine for erectile dysfunction and most men have forgotten they ever had a problem with erections after its use. Take it on empty stomach and it will work in 30 minutes. Erections can be achieved on stimulation.