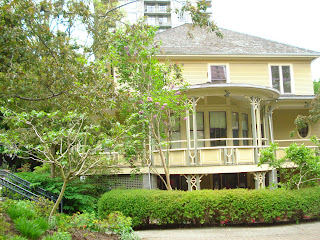 I've been making about as much progress as poor old Polyperchon is in his attempt to hold back the invading army of Kassandros.

It seems there's been no end of distractions and events that have eaten up all my writing time in the past two weeks. Lots of fun, but now I'm exhausted and this week I am determined to rest up and get focused again. I'm so far behind.

My Memoir and Travel Writing classes ended last week. Above is the back of the heritage house where I hold the memoir classes each Thursday morning. A lovely old house in the West End of Vancouver, one of three on the block that have been preserved as heritage homes. There are beautiful grounds around the house and below are some of the flowering azaleas in the garden. 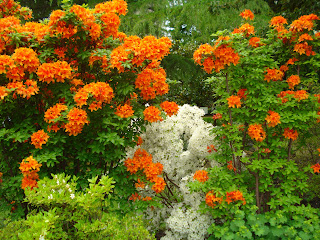 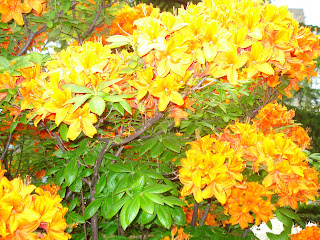 Some of the activities that have taken up my time these past two weeks included my high school's 100th anniversary and the arrival of my friend Patrick and his mom, Hanne, from Germany. They were only here for 3 days but it was quite a whirlwind, long walks and playing tour guide. Very exhausting. We took the ferry one day to Vancouver Island which was a nice trip but more walking. And I have been suffering through the pain of a pinched nerve in my foot and other foot problems. I ended up spending more money on a podiatrist and he suggested the proper shoes I need for all the walking I do. It's all eating into my Chile fund so I'm going to have some hefty saving to do this summer to catch up if I want to go to South America. Meanwhile, I'm heading south to California for my grandson's graduation from university. I'll stop in San Francisco first to visit a cousin, then go to Santa Barbara for the grad, then on to Bakersfield to visit my dear Auntie who is 91 and still active. I'm leaving next week so this week I am desperately trying to get things done. I've hardly been home at all lately and needed some down time.

Today I made a long list of things I must get done and so far manged to accomplish some of it. Each day I will have to do more. But tomorrow for sure I need my water-fit as my poor achy body needs some stretches. I did manage to take my bike out last weekend (first time in months) and peddled to a local pool for a swim. But since then the weather hasn't been good enough or I've been busy with other activities. I'll post a couple of the more interesting ones on my other blogs. But it was a birthday party weekend this past Friday with a small preliminary Gemini party at my friend's house as it was her boyfriend's as well as my birthday coming up. (Mine is tomorrow, June 3) and next Sat. we'll have a gala at the Latin Quarter with lots of salsa dancing and fun with friends.

Today I managed to get back at Shadow of the Lion. Still trying to finish up this chapter and so very little to go to actually finish Part VI.
I was really hoping to have it done by my birthday, but all these other things kept me from it. In addition, two weeks ago I got waylaid by an invite to submit a travel story to a certain syndicate and that turned into such a fassaria (as they say in Greek) I later regretted going along with it, especially when I had to question whether the $5. I might or might not make for my effort was worth distracting myself from my more important work: the novel! But...as I was told...it' "good exposure". Well, we'll see about that.

Meanwhile, my travel web site is getting readers and contributors from all around the world so that's a good sign. I just hope everyone remembers to click the google ads for me so I can make a bit of money to help pay for the site. Up to now it's out of pocket. But it's worth it, I think. And lots of fun to do. We decided not to publish in June though, as my webmaster is busy with another project, and I'll be away.

So...here I am on the bring of another year. Yikes! The numbers keep increasing. But somehow I keep on going -- as if the numbers are actually reversed. I'll write in my "Conversations With Myself" later on this week after the celebrating is over.

Until then...it's back to Alexander's world (where I truly wish I was going right now. But the sunshine and beaches of California will have to do.)

I love those pictures! The colors are so lovely and vivid.

It sounds like you have a LOT on your plate. Living in San Francisco I can tell you not to expect warm weather. Summertime means FOG and that means cold!

Oh yes, I had forgotten that S.F. has a similar climate to Vancouver (plus the fog!) Right now it's raining a deluge here and cold as November.