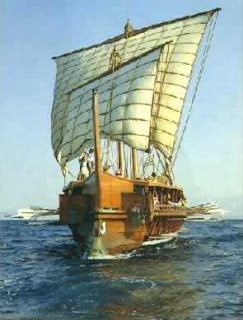 "Any excuse will serve a tyrant"
Aesop "The Wolf and the Lamb"
This little excerpt from my recent writings reminds us that history repeats itself. There are parallels between then and now. Think about it!

A misty rain was falling and the haze, mingling with the swirls of fog off the sea, cast an eerie pall over the coast. The only sounds were the grinding of the oars against the thole pins, the whack of blades as they hit the water, and the swoosh of the wake as the ships’ hulls cut through the waves. The fog lifted as the warships ploughed in and observers from the shore could see that the decks were crowded with armed men.

As the fleet streamed into the harbour, spectators who watched from the Long Walls, mainly the democrats who had strongly opposed Macedonian domination over the city, wept in despair. “Surely it bodes ill omens,” they wailed. “What is to become of us and our City now?”

By noon, Kassandros and his army disembarked. When his supporters, the aristocrats, saw Kassandros step ashore, mounting the strand with his maroon cloak and plumed helmet, they cheered in approval and welcomed him.

In Athens, panic prevailed as packs of looters rampaged through the city vandalizing statues, swarming the marketplace and overwhelming merchants as they tipped over carts and stole anything that could be carried off. The citizens cowered in alarm and watched in terror as armed troops marched into the agora and city squares beating and arresting the malefactors. There was such chaos that even the Assembly dared not meet.

Kassandros ordered that all the members of opposing factions be arrested and condemned to death, including the garrison commander, Nikanor, who he blamed for the riots. He immediately set about to establish a government that was friendly to himself, putting his ally, the aristocrat Demetrius of Phaliron, in charge. A decree was passed that the Athenians were allowed to have possession of their city and its revenues, but the citizens were ordered to give respectful hearing to all suggestions of Demetrius. Athens was now in the hands of tyrants.


North of Athens, where his army was encamped, a look of disbelief crossed Polyperchon’s face when he heard the news. His son Alexandros and the Macedonian troops he commanded had retreated from Athens and Polyperchon realized that an invasion would be impossible. There was only one thing left to do: count his losses and withdraw. Marshalling what was left of his fractured army, beaten and disheartened, he led his soldiers north. His only hope now was to return to Macedon and recruit additional troops. Without more men and arms a counter-attack against Kassandros would never succeed. 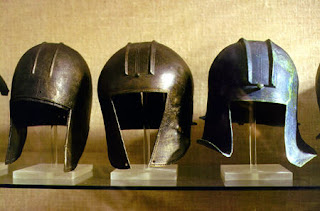 I've had an interesting weekend but still managed to get started on Part VI of the novel. First I had to execute Phokion, the military governor of Athens, then I had to plan a naval battle.
It turned out there were some interesting parallels beginning with Sunday when I had the pleasure of cruising the fjords and inlets around Vancouver and on up the Fraser River to dock after eight hours of sailing. What a great way to relax and clear the mind for the week ahead!

On Monday I got back to serious writing and finished the segment where Phokion and his four friends, who are condemned to die for treason, must drink the hemlock so that their accusers can get them out of the way before Kassandros invades Athens with his navy and troops.
This resulted in a very weird dream Monday night. I dreamed that I was in charge of hiding the body of a man (a poet, or writer) who had been poisoned. He wanted his body stuffed in a sack along with his books. I was dismayed lest I be accused of his murder. Eventually when I found the sack hidden in a closet, the body had disintegrated to bones but the books were still intact. I had to hide it quickly, but all the garbage bins were full (we have an on-going 6 wk. garbage strike here) so I lugged it to the School Board office, took it to the basement and ditched it in a big trash container. End of dream.
In analyzing it there were some parallels with what I'd written and what has been going on here with the strike and all. Very weird! The poet in the dream? Well, yesterday I got a strange email from someone inquiring about a certain mad poet I know from Athens who I had mentioned in some old blogs. Long story and a very strange one. He was advertising his 'last will and testament' and looking for an executor. Obviously some kind of scam. Interesting though because I was wondering if he was still around and apparently he is.

Summer is winding down but the weather is holding up so I'm off to the beach for another picnic and then to meet friends for our usual Wednesday night jazz. The writing is progressing and I'm happy. But still there's time for leisure and fun.

"When the tyrant has disposed of foreign enemies by conquest or treaty, and there is nothing to fear from them, then he is always stirring up some war or other, in order that the people may require a leader."
Plato 428-348 BC
"Republic" bk VIII

Fascinating snippet - very detailed about the boats. I had no idea what a thole was, lol!
And funny dream - a short story in the making perhaps??
I'm also very concerned about the Greek fires - I'm glad they're thinking of treating the arsonists as terrorists (and murderers!) All this for a question of building permits, was what I understood!!
Greed is so destructive!

I agree that your description of the boats is wonderful. Very interesting!

I read that the fires are mostly under control (hopefully they'll ALL be under control and put out soon). While reading about this I remembered the story of how after the Persians burned down Athens the shoot of an olive tree was found on the Acropolis, which gave the people hope. So I'm sure that the people of Greece will somehow get through this tragedy.

Loved that excerpt. Your description was just alive with imagery, Wynn!

I love dreams and have learned so much from mine, which are usually quite long and detailed. They’ve often included wispy messages and predictions that later materialized. My characters also come and talk to me in my dreams. A bit of writer’s craziness. ;-)

Hi blogger friends, I'm just planning a coup...it never ends.
Re the fires: I have been getting emails from friends in Greece and Europe about this situation. There is certainly suspicion on land developers for their deliberate cause and also a lot of political stuff involved. Greece has been notoriously lax in pushing through proper regulations and permits for developers and apparantly this is a result. Hopefully out of this tragedy will come some changes in laws and legislation.