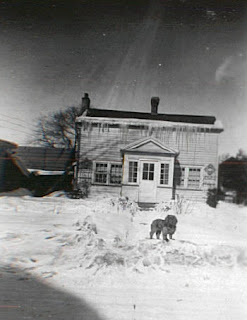 "How I miss that Old Fashioned Christmas
Carols being sung by the tree
Window's candlelight shing bright
for the whole world to see..."

Christmas in the ‘40’s was a time when all the relatives came to celebrate at Grandpa’s house. We would troop down to the train station and stand waiting on the wooden platform, our breaths puffing like the steam from the locomotive engine, the frosty winter air nipping our cheeks into roses. The train chugged into the station, the coach doors opened and travelers spilled out onto the platform. Happy greetings filled the air as merry as caroller's songs, families embraced and made their way down the snowy streets.

When my uncle, aunt and cousins arrived, we all went back to Grandpa’s house. How my grandparents found room for everyone, I can’t imagine. All the Aunts, Uncles and Cousins crowded into the small living room around the Christmas tree to chat, the crackling of the flames in the hearth sounding like pop-corn. After a few games of monopoly and Chinese checkers, my Uncle Frank would performed a comical rendition of “Herbert Burped”, tongue-in-cheek, about a little boy who gets swallowed by a lion. Then all of us children were tucked snugly into beds, often three in a bed, the middle one squished between the other two, warm in our flannel nighties, while the grownups sat up late eating Christmas cake and drinking ginger ale.

One particular Christmas stands out in my memory. That was the year I purchased the best Christmas presents I’d ever bought before. Certainly, the most memorable!
I was nine years old, and I felt very grown up as I went off to town to do my own Christmas shopping. I headed straight for the Woolworths Five and Dime store where you could always get the best bargains. I looked over all the trinkets, trying to decide what would be the finest gifts. It was difficult to decide. I wanted something unforgettable. Something everyone would love.

Then I saw it. A little Chinese clay dragon on a bamboo stick. The head of the dragon was made of painted clay, and it had a red felt tongue that looked like fire shooting from its gaping mouth. The body was accordion-pleated tissue paper. When you waved the stick, the body expanded and the head shot out, tongue flickering, like a real fire-breathing dragon. The Chinese dragons would make the perfect Christmas gifts!

I bought one for each of my relatives and excitedly headed for home, proud of myself for making such an extraordinary purchase. But when I showed them to my Mom, she was not she
scolded me for ‘wasting’ my money on such foolish toys instead of buying something more ‘practical’. I felt crushed, disappointed. However, it was too late to return the dragons to the tore, so I wrapped them up and put them under the Christmas tree with the other gifts.

On Christmas morning I waited nervously for everyone to open their presents. I felt embarrassed thinking that my relatives would think the present’s I’d bought were foolish and useless.
Instead, when the gifts were unwrapped, everyone was amused and delighted. especially my Uncle Frank. He played with his dragon all day. Of course, Uncle Frank always was the life of the party!

"One Christmas was so much like another, in those years around the seatown corner now and out of all sound except the distant speaking of the voices I somtimes hear a moment before sleep, that I can never remember whether it snowed for six days and six nights when I was twelve or whether it snowed for twelve days and twelve nights when I was six."
Dylan Thomas 1914-1953 "A Child's Christmas in Wales." 1954
Posted by Wynn Bexton at 9:35 AM

What a delightful gift! Of course everyone loved them -- and good for you, not bowing to "practicality", but to magic.